As concerns grow about the long-term viability of global natural resources, organizations such as the Ellen MacArthur Foundation and the European Commission are championing the idea of a circular economy – a reduce/reuse/recycle business model with the potential to bring significant environmental benefits and sustainability.

As the world’s population continues to boom, reports of depleting resources are causing policymakers to rethink the take/ make/ throw away approach that has been the status quo since the Industrial Revolution took hold more than two centuries ago.

“By 2050, we could need three times more resources than we currently use, due to growth in the global population and in consumer demand,” said Enrico Brivio, spokesperson for the European Commission on the topics of environment, maritime affairs and fisheries, as well as health and food safety. “The global demand for food, feed and fiber will rise by 70%. We have no choice but to alter our production and consumption patterns if we want to keep our planet in good shape for future generations.”

Such pronouncements have given rise to initiatives such as turning waste into building materials and new sources of fuel; manufacturing new products from recycled parts; and providing products as services, rather than as individually owned goods, also known as the “sharing economy.” All of these trends are part of a bigger movement, widely referred to as the “circular economy,” which focuses on restoring and regenerating resources.

“The circular economy is a logical solution for a resource-constrained world, as almost nothing is wasted,” Brivio said. “The idea is to keep resources in the economy. When products reach the end of their lives, the useful materials they contain are harvested for reuse, creating further value.”

The Ellen MacArthur Foundation has become synonymous with the circular economy movement and is a driving force behind the transition to a sustainable business model. The foundation is named for long-distance yachtswoman Ellen MacArthur and was launched five years after MacArthur completed the then-fastest solo circumnavigation of the globe in 2005. After the trip, MacArthur said the experience of getting by with only what she had onboard had made her realize how far limited resources could be stretched, an observation that inspired the foundation.

In 2013, the foundation set up its Circular Economy 100; to date, 90 regions, emerging innovators and leading companies, including Apple, Coca-Cola, H&M, Philips, Lexmark, Kingfisher, IKEA and Novelis, have become program members.

“For us, these restorative values represent opportunities for businesses to give something back,” said Chris Law, a director for the UK division of Lexmark, a global printing and imaging solutions provider. “There’s a chance to try and alleviate resource challenges through the reuse of materials, but also by extending the use of devices and materials that are manufactured.”

Lexmark has zero landfill and incineration policies; the printing products it recovers from customers are recycled or reused. “We don’t see our consumable items as waste,” Law said. “We will take back customers’ used cartridges and either reuse and sell them again, or recycle them in an environmentally appropriate way.”

Others are taking a similar tack. Fashion retailer H&M, for example, launched a global in-store clothing collection program in 2013 that encourages customers to bring in end-of-use clothes in exchange for a voucher. Used clothes are either sold secondhand; converted into other products, such as cleaning cloths; or recycled for reuse as textile fibers or insulation.

With the “light as a service” initiative from global specialist Philips Lighting, customers only pay for the light they use. Philips remains the owner of all fixtures and installations. The company is therefore responsible for the performance and durability of the system, and ultimately for end-of-life reuse and recycling.

For Andy Doran, sustainability and recycling development manager for Europe at Novelis, a leader in rolled aluminum products, being involved in the Circular Economy 100 provides an opportunity to explore new ideas.

“It holds a diverse spectrum of companies, regions and academic institutions – a heady mix within which innovation seems to be the common language,” Doran said. “We are proud of our circular economy credentials and are happy to share our experiences, both good and bad, within that forum. I think we have also learned that often, new sustainability challenges are more easily solved by sharing ideas and bringing in new partners from outside your own organization.”

For example, Novelis has worked to develop what Doran describes as closed-loop “circular systems” with automotive companies Ford and Jaguar Land Rover to ensure that scrap is fed back into productive loops and valuable material is not downcycled through the supply chain.

“At the center of our strategy is an accelerated growth of recycling capacity and capabilities,” Doran said. “We’ve invested significantly – US$0.5 billion over the past five years – in expanding our global footprint to be able to recycle and re-melt more aluminum to incorporate into lower-carbon products. Our current operating level is in excess of 50% recycled metal within our global production. We have a long-term ambition to move this towards 80% recycled metal.”

However, Doran admits that more can be done. “I don’t think we have all the issues solved yet. But as ‘circularity’ becomes more widespread, I’d hope to see an accelerated pace of change.”

Interest in the circular economy is not limited to Europe and the US. In Asia, the China Association of Circular Economy was established in 2013 with the aim of growing the initiative in China. Japan passed the “Law for the Promotion of Effective Utilization of Resources” in 2000. The law covers products across their lifecycle and legally requires companies to run disassembly plants, placing a greater focus on reusing materials.

Sendle, Australia’s first carbon-neutral delivery service, picks up and delivers parcels across the country. The company has a vision of becoming “the logistics service for the circular economy,” and it selects its couriers based on their carbon footprints. Sendle uses hub-and-spoke couriers that transport packages on shared vans, rather than point-to-point couriers using separate vehicles.

The company also offsets its emissions through its involvement in two climate-friendly projects. The Tassie Native Forest Protection Project helps protect Tasmania’s native forests and biodiversity by providing a business model to compete with logging or clearing for agriculture. The Toyola Cookstove Project in Ghana supports the development of four fuel-efficient cookstoves for household and commercial use, reducing the use of charcoal for cooking by as much as 50%.

The Recycling and Economic Development Initiative of South Africa, meanwhile, has developed a Waste Tyre Management Plan that is considered unique in the field of waste stream management. Tire producers are charged a waste management fee on every kilogram of new tire rubber they produce. These funds are then collected and applied to developing and supporting the collectors, storage depots, recyclers and secondary industries that make products from recycled output. The program is helping to develop new business while providing much-needed jobs in South Africa.

WILL THE CIRCULAR ECONOMY MAKE A GREENER FUTURE?

While momentum is building behind the circular economy, promoting the concept has not been obstacle-free. In 2014, the European Commission faced criticism when it scrapped its initial Circular Economy Package in response to concerns from trade associations that the plan might inhibit European competitiveness.

Broader and more ambitious plans are set in motion, but circular economy supporters have criticized the delay. “They could have kept it on the table and improved on it and we would not have lost a year,” Janez Potočnik, former European commissioner for the environment and the man behind the commission’s original Circular Economy Package, told members of the media. “It would have been more credible if they had not withdrawn the package.”

With a more ambitious package and a broader economic scope now in place, however, the commission believes it is back on the right path. “We want to look beyond waste and address the full cycle of the circular economy, taking into account the situation in all member states,” Brivio said. “Therefore, we will look into goals on recycling levels, a smarter use of raw materials, intelligent product design, reuse and repair of products and recycling.”

In a similar vein, the Ellen MacArthur Foundation recently launched a “how-to” guide for policymakers as they assess a country’s starting position, select focus areas, find opportunities and identify barriers. “The toolkit provides a platform for new collaborations between industry and policymakers – building momentum toward the system-level change needed for transition to the circular economy,” MacArthur said.

“We need to set smart, ambitious, but realistic objectives and make sure that policies are properly implemented on the ground,” he said. “We need a combined approach where better regulation is blended with market-based instruments, research and innovation, incentives, information exchange and support for voluntary approaches. This would provide businesses with concrete tools, instruments and incentives to promote the transition to a circular economy.” 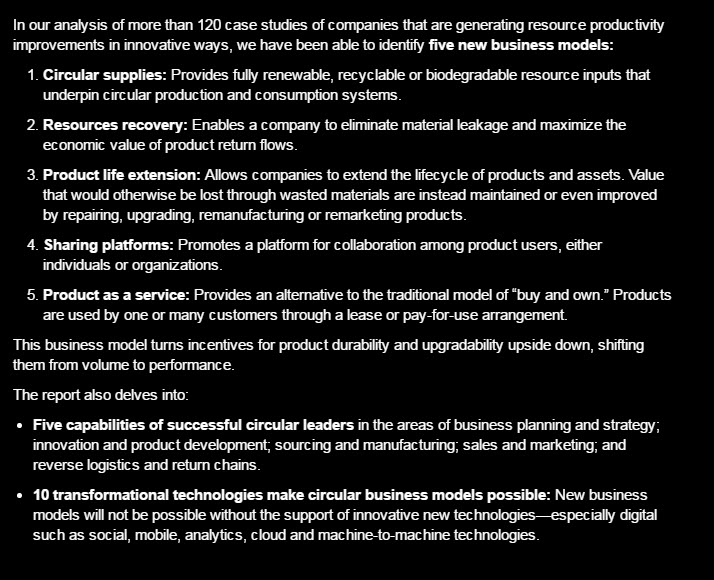