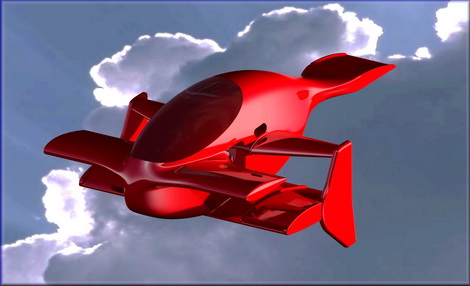 Here is one of our current Passion for Innovation projects: Xplorair.

When I was approached about it, I immediately thought, “Wow! Here is The Fifth Element taxi!” That being said, it quickly became obvious that Xplorair was a solid project, lead by an experienced aero engineer named Michel Aguilar.

The candidate projects we favor most in Passion for Innovation must bring something new and exciting to the world. There was no doubt about the excitement Xplorair generated when I read the proposal. And as for innovation, well, I’ll let you decide for yourself:

The Xplorair is a vertical take-off and landing without rotative wing vehicle based on the Coanda effect.

What is the Coanda effect? To put it briefly, it’s the ability of a fluid flow (liquid or gas) to “stick” to a convex surface and to attract it. It has been studied by the engineer Henri Coanda, therefore its name. A simple demonstration of this effect can be done by holding a sheet of paper by one of its ends, with one hand on each corner of that end. Blow on the piece of paper while aiming your breath between your hands, and you will see the free end of the paper rise up.

Congratulations! You have shown that upper surface blowing creates a bearing strength. This is what Xplorair is based on. If you blow on a wing’s upper surface, you will take off. If the wing is in fact made of two articulated parts with the jet engine blowing somewhere in the middle, it’s enough to change the angle between the two wing parts to make the transition between vertical take-off, and regular, horizontal flight.

The Coanda effect has already been used on some aircrafts to bring additional bearing strength and reduce take-off distances. However, Xplorair is definitely a breakthrough as it is the FIRST aircraft entirely relying on this effect for BOTH take-off and flight.

To spice up the project, Xplorair will treat the subject of greener mobility. The engine– a brand new kind of engine called a thermoreactor– is a second technical breakthrough in its own right. It will use second generation biofuels (i.e. non threatening for food nor biodiversity), and some cabin elements, such as the control panel and seats, will be made out of agro-materials.

Xplorair will come in several versions (1, 2 or 4 seats). For starters we’re working to develop the monoseat version, the PX200 (for Personal Xplorair, 200 km/h).

The Xplorair team is using CATIA V5 as the 3D CAD software for design, SIMULIA and CAA-partner CD-Adapco solutions to simulate the vehicle in operation.

So, is Xplorair an airplane? a flying car? a flying motorbike? No matter what you call it, it’s a new mobility concept.

And who could give this concept a shape if not DS Design Studio? I’m happy to announce that we just started the ideation phase with Anne Asensio’s enthusiastic and creative team. They were already sketching during the meeting. 😉

P.S. Unfortunately, neither Bruce Willis nor Milla Jovovich will be delivered with the final product, just in case you’re wondering . . .