In just a few days, over 20,000 people are expected to hit the floor at the World Cities Summit (WCS) in Singapore, a city renowned for its innovative urban planning. Centered around how strategic collaboration efforts and cutting-edge technologies can enhance livability and wellbeing for residents, this sixth edition of WCS will bring together a record number of mayors from around the world.

The WCS is taking place at a time when urbanization is rising at an unprecedented rate. To put things into perspective, in 1950, 30% of the world’s population lived in urban areas. Today it’s 55%, and by 2050 this will have risen to 68%. By 2030, the number of megacities – cities with more than 10 million inhabitants – will increase from 33 to 43. This rapid urbanization won’t come without major consequences as the demand for services will grow.

Energy consumption is one of the most striking examples. Cities today account for more than 75% of global primary energy and emit between 50 and 60% of the world’s total greenhouse gases according to UN Habitat. Between 2015 and 2040 the world’s energy consumption is set to rise by 28%. Research from C40, a network of the world’s largest cities representing more than 650 million urban citizens, shows that, by mid-century, over 800 million people living in cities will be impacted by 270 plants facing increased risks of flooding from coastal inundation due to sea levels rising. In addition to power supply issues, global demand for fresh water is expected to increase by around 55% by 2050 – but cities are set to face a decline in fresh water availability by at least 10% due to climate change.

Challenges facing city planners are multifaceted. From managing changing resource consumption patterns to predicting adverse outcomes from future programs, city leaders have to keep pace with urbanization. Technology can help a great deal in that regard. Take a city like Singapore. The National Research Foundation Singapore (NRF) together with the Singapore Land Authority (SLA) and Infocomm Development Authority of Singapore partnered with Dassault Systèmes to develop Virtual Singapore, a 3D replica of the city that lets all users visualize how Singapore will develop and evolve in response to multiple scenarios: major events, population growth, new constructions, etc.

Virtual Singapore brings together a wealth of data, ranging from energy consumption metrics to census numbers, allowing city stakeholders to make informed decisions based on advanced simulations. And the applications for cities are virtually infinite. Modeling the impacts of future developments can help anticipate potential issues before a project is actually built. The model lets you analyze, for instance, how the construction of a new public space might impact things such as traffic, pollution and population density. 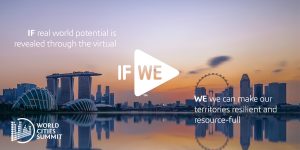 With the implementation of data-driven digital twins such as Virtual Singapore also come new approaches to city planning thanks to citizen involvement. The National Research Foundation has teamed up with local academic and scientific communities to involve students in the crowdsourcing of data to enrich the 3D model by capturing environmental data such as temperature, humidity and noise levels. In exchange for generating data, participants can log in to see their own stats, allowing them to be more in sync with their environment.

During WCS 2018, which takes place at the Sands Expo and Convention Centre, Dassault Systèmes will be at Level 5, Booth L5-18 showcasing great examples of how we’re supporting cities, businesses and citizens to build insight through exploration in the virtual world to promote resilience and resourcefulness in the real world. We will present nine concrete use cases based on Virtual Singapore showing how technology can help make cities more livable and resilient. If you’re attending, don’t miss an opportunity to connect with our experts to see for yourself how cities across the world can leverage the virtual to improve the planning, design, construction and management of cities and territories.