New devices and materials promise to make dentist visits more pleasant, and help maintain our teeth between checkups. Here’s how.

Devices: Dentists may soon be able to eliminate tooth cavities quickly and painlessly without any drilling or filling. Tooth-destroying plaque, which feeds on dissolved food, comprises a complex mixture of bacteria that release acids into teeth, slowly dissolving dental minerals. But researchers at Reminova Ltd., a King’s College London corporate spinoff, have developed a device that re-inserts the calcium and phosphate minerals.

“We can stop the process and we can reverse it,” says Christopher Longbottom, fellow at King’s College London and Reminova co-founder. It’s not straightforward, but he says, we “can speed up the process of remineralization.”

Two or three agents clean out the proteins and lipids that have seeped through the plaque and replaced the minerals, then a tiny, imperceptible current drives the good minerals back into the tooth. The process takes about one hour, which Reminova hopes to reduce to between 20 and 30 minutes.

An alternative method is for a graphene sensor 50 microns thick (i.e., half the width of a human hair) with gold electrodes acting as an antenna, to be printed onto water-soluble silk and “tattooed” onto the tooth. As Manu Sebastian Mannoor, assistant professor at the Stevens Institute of Technology in Hoboken, N.J., explains, the graphene, which conducts the bacteria’s electrical charge, is coated with peptides that bind to bacteria such as streptococcus mutans, listeria or salmonella. 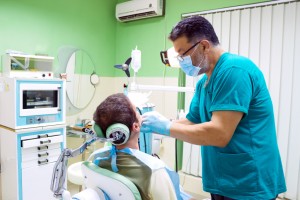 A dentist could read the sensor like a radio frequency identification (RFID) tag to ascertain the extent of any decay or disease. The latter might include Heliobacter pylori, which is associated with stomach ulcers and cancer when found in saliva. Sensors could also be attached to bacteria-hosting objects such as hospital door handles or intravenous bags, warning of exposure to the likes of staphlylococcus.

Materials: For over 150 years, dentists have filled tooth cavities with mercury-based silver amalgam. More recently, researchers have sought alternatives, encouraged not least by the 2013 United Nations Minamata Convention on Mercury, which aims to reduce its harmful health and environmental effects.

One such possibility, for use as fillings and crowns, is glass ionomer cements. These enjoy numerous advantages: they don’t need an intermediary adhesive to bond to the tooth; like a tooth they expand and contract as temperatures change; they’re biocompatible; and they release fluoride. However, “the strength of these materials has not yet reached an optimal level,” says Ana Raquel Benetti, dentist and researcher at the Department of Odontology at the University of Copenhagen.

Dr. Benetti and Dr. Heloisa Bordallo studied the structure of conventional glass ionomer cements, with the aim of improving their durability. “Our work shows liquid mobility within the cements,” Dr. Benetti explains.

By improving the binding of the liquid to the cement structure, the material might become stronger.”

In other advances, scientists at the University of Rochester and University of Pennsylvania have found a way to use nanoparticles to deliver the antibacterial agent farnesol to plaque. Meanwhile, researchers at Anhui Medical University in Hefei, China, and the University of Hong Kong drew inspiration from the way mussels attach themselves to surfaces, and used a similar polydopamine to coat teeth, which helps remineralize their dentin, or interior.

And scientists at the Ninth People’s Hospital, Shanghai Key Laboratory, Shanghai Research Institute of Stomatology and Shanghai Jiao Ton University in China found that graphene oxide can fight bacteria in the mouth. Unlike treatments for tooth and gum-disease that rely on antibiotics (despite increasingly drug-resistant bacteria), graphene oxide destroys the bacteria’s cell walls and membranes, inhibiting their growth. One day, we might all protect our teeth with nanosheets.