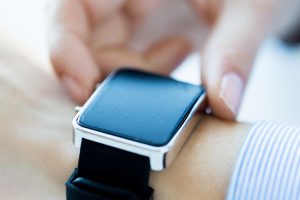 Millions of people world-wide wear devices to track their activity, heart rate and sleep. The number of wearable sensors is expected to reach three billion by 2025. Employers are looking at how the devices can improve workplace safety, especially in dangerous or remote environments.

A hospital in Turin, Italy, experimented with a variety of wearable sensors as well as sensors incorporated into the environment—the Internet of Things, says Guido Boella, professor of computer science at the University of Turin, who was one of the researchers of the study, called Sensing Safety at Work. A dashboard showed  not only information from the sensors, but also a map of the hospital to pinpoint workers in distress.

Sensors on wristbands were given to employees in a laboratory where toxic substances were handled. “If they got sick or fell down, it set off an alarm and showed them on the map,” he says.

Another aspect of the study used sensors on bands on the wrist or body, or on necklaces, designed to avoid being invasive while employees worked, but which could signal problems by setting off an alarm via vibration, light or sound. A third experiment combined information about the dispersion of toxic substances in the air with the physiology of individuals. 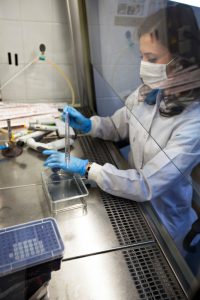 “We combined data from people with wearables with data from Internet of Things sensors”  detecting substances in the air, Dr. Boella says. “For many substances, the problem isn’t just a threshold level present, but how much of it is absorbed. That depends on a person’s activity, how long they are exposed, how high their heart rate is. The values from the body were combined with values from the Internet of Things sensors in the room to provide personalized alarms.”

Both the cost and size of sensors have diminished greatly in the past few years, but battery life is still limited, requiring either better batteries or more efficient hardware, says Saul Delabrida, assistant professor at the Federal University of Ouro Preto in Minas Gerais, Brazil.

Connections also are an issue. “The current state-of-the-art of the technology allows creating wearable devices with enough power-computing capabilities to process the data collected from the sensors without a Wi-Fi connection,” he says. “The sensors need to be connected to the module [that’s] able to execute an algorithm that provides information to the user in this strategy.”

Sensors can monitor workers for fatigue, overheating and cold, as well as location—to find a forestry worker alone in a remote place, for example. Already the mining industry uses sensors for detecting dangerous levels of dust and gases, and proximity sensors on both trucks and miners to reduce accidents. “When he raises a bucket of rocks, the driver doesn’t have a good view,” says Martin Lavallière, professor of health and kinesiology at the University of Quebec at Chicoutimi, Canada. An alarm in the truck warns the driver that a miner is nearby, while a wearable on the miner alerts him that he’s too near the truck.

Employers also can promote health and wellness through the activity trackers that many employees already wear, in a trend that reflects the BYOD—Bring Your Own Device—model for smart phones at work, Dr. Lavallière says, or they can choose one brand and provide it to all employees. Either way, the goal is to give incentives to employees, to make sure they get enough activity and maintain good health behaviors.

“If employees maintain their health they will be able to be more productive and more efficient, with fewer absences for sick leave, less ‘presenteeism’—when they show up for work sick and are not as productive,” he says. 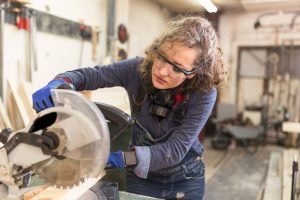 Employers could use the data on an individual level to encourage wellness, or could aggregate the information to gain insights into how employees react to situations at work. For example, “they could see that every time employees go to this workstation, their heart rate goes up,” Dr. Lavallière says. “Is that because the work is physically demanding, or because someone nearby is creating a stressful environment through their behavior, like yelling at people? When you look at the data from all the employees, you can say, ‘This job seems more stressful. How can we make it better? Should we separate the task in two?’”

Another question will be how employers deal with worker privacy and control.

The factory of the future could use these devices not to track whether someone is not feeling well, but whether they are making the right movements with their hands,” Dr. Boella says.

A wearable sensor could detect whether a worker is assembling an appliance in the authorized way. On the one hand, such monitoring could reduce repetitive-motion injuries. On the other, “there may be no more freedom to do things in a different way,” he says. “Not even controlling our bodies and movements.”

Tracking how many steps an employee takes or how long they sleep “could be seen as Big Brother at work,” Dr. Lavallière says.

In introducing wearable sensors in the workplace, employers need to explain the nature of the data collected and use incentives rather than punishment, he says, adding, “There will always be a conflict between the employee and employer. What’s important is that everyone draws benefits from the technology.”