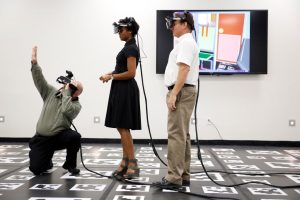 Designers have been working in 3D software for years, generally reviewing their work on a 2D computer screen.  Even as larger monitors were produced, there were limits to how well a product could be viewed on a flat surface; not all product elements could be seen enough to ensure issues were caught early – critical since that’s when it is a lot less expensive to make changes.

Some large, well-funded companies developed immersive CAVEs (Cave Automatic Virtual Environment): virtual reality environments consisting of a cube-shaped room in which the walls, floors and ceilings are projection screens.  Donning a VR headset, users can interact aided by devices such as wands, joysticks or data gloves.

But not everyone can afford to build a CAVE, and even those that can are limited by the expense of the headsets and by the requirement that users be present at the facility in which the CAVE is located. 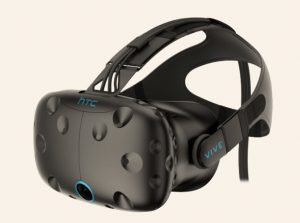 In 2016, a new solution for 3D design review emerged: low-cost head mounted devices, or HMDs. This development is opening up an entirely new age of design.  Now, many more designers and engineers – regardless of where in the world they are – can immerse themselves in a design and experience it in a way that makes any issues much more evident.  This saves time and money because changes can be made before the physical product is built.

Check out the latest issue of Compass for an article entitled “Product Design Enters a New Reality.”  You’ll discover examples of how organizations like Embraer and NASA are leveraging this immersive virtuality (iV) technology, and how they expect it to improve their designs and the processes behind them, as different teams can collaborate more easily and see – and resolve – issues in less time.