In the first installment of this series, we talked about how CPG companies might apply the first-person POV popularized in MMORPGs like World of Warcraft to achieve a more lifelike experience with consumers in virtual store environments.  Today we’ll talk about how CPG companies are leveraging Second Life – a multi-user virtual environment (aka “MUVE”) – to enhance both their consumer-facing activities and their internal operations.

Note: With Dassault Systèmes’ V6 PLM 2.0 software and 3DVIA Scenes,  our CPG clients have the possibility to exercise business in proprietary virtual worlds similar to Second Life.  More on that in future 3D Perspectives posts.

Avatar-based virtual experiences have increasingly captured the attention and imagination of consumers in the new millennium (as witnessed by the meteoric success of the recently-released film Avatar and the aforementioned World of Warcraft).  Accordingly, since the emergence of the virtual world Second Life onto the Internet scene in the early 2000s, CPG companies (as well as companies in many other industries) have explored avenues to reach the growing consumer population engaged in this virtual experience.

While I could talk about how CPG companies are using Second Life for advertising, market research, virtual meetings and human resource management (more on those topics later, perhaps), I would like to focus today on two key functions that PLM and virtual worlds have to offer CPG companies: collaborative design and crowdsourcing.

Design Collaboration
Increasingly, new product design team members in the CPG industry are no longer physically co-located, but rather distributed across time zones and continents.  The expectations placed on NPD teams remain the same, however: get winning products to market faster and more cost-effectively.  As virtual design team collaboration increasingly becomes the standard in the CPG world, we are challenged with devising team collaboration spaces that mimic – if not improve upon – traditional face-to-face team collaboration environments.

You might be wondering: Is it possible to collaborate more effectively in a virtual setting than in a face-to-face setting?  There is a growing body of evidence that suggests it is.

Penn State researchers created an experiment in which teams were asked to solve a complex problem, using different meeting styles: 10 teams worked face-to-face, 10 teams worked through teleconferencing, and 12 teams worked as groups of avatars in Second Life.  The face-to-face teams felt most confident of their performance, yet the Second Life teams provided the most accurate answers in the task . 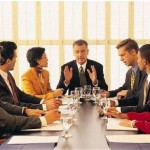 In their research New Product Development Decision-Making Effectiveness: Comparing Individuals, Face-To-Face Teams, and Virtual Teams Mitzi Montoya-Weiss and her colleagues explain this phenomenon.  They suggest that “face-to-face teams are subject to group dynamics or social influences that may contribute to decisional error.”  Those influences include the “strain toward uniformity” and the dependence on others’ opinions for social validation.

There are several real-world examples to support the notion that virtual design collaboration in Second Life can be effective for globally-distributed teams.  Rivers Run Red, a virtual world development company that offers its Immersive Workspaces™ solution on the Second Life Grid™ lists GE, Johnson&Johnson, Herman Miller and Unilever among its customers using prototyping solutions .

Crowdsourcing
The Internet Age has made it easier for CPG companies to reach into their ecosystems to solicit new product ideas from suppliers and consumers alike.  This practice – often referred to as “crowdsourcing” or “open innovation” – is typically conducted through corporate extranets or third party sites. 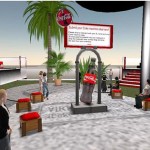 Coca-Cola demonstrated its pioneering use of technology to reach consumers by leveraging Second Life as a platform for one of its crowdsourcing initiatives.  In 2007 the company launched a contest in Second Life for a virtual Coke machine.  The contest invited residents to design a Coke dispensing machine for use in Second Life; since the use of the machine was intended only for the virtual world, the design possibilities were limited only by residents’ imaginations.  As Kristen Nicole pointed out on her blog on the topic:

The best thing about having this kind of contest in Second Life is that a design can be implemented within Second Life, though real life constraints would render it impossible. Not to mention, it would cost far less than creating a physical manifestation of a Coke machine, but still warrants all the branding and viral opportunities that marketing strategies aim for.

Now imagine crowdsourcing the design of a real-world product (one that is ultimately intended to be produced and used in the physical world) through a virtual world like Second Life or another.  The virtual world setting, if coupled with real-world laws and physics, would provide the lifelike contextual environment needed to accurately test and adjust the design until perfection is reached.  The virtual setting would also provide the means for people situated in different places to work together.  At Dassault Systèmes we refer to crowdsourcing as social innovation.  This video illustrates social innovation with a powertrain crowdsourcing design example.

These are only two examples of how CPG companies can use Second Life to enhance consumer interactions and improve internal operations.

Is Second Life enough, or would CPG companies benefit more from a different kind of MUVE/virtual world?

P.S.  Look me up in SL – my avatar name is Lester Snowpaw.

Latest posts by Vincent (see all)