What’s faster than a ship or train, more eco-friendly than a plane, and doesn’t use roads, rails or ports? Huge airships, which may soon ferry cargo from point to point.

Airships “will create a new transportation system. Air is the ocean and the port can be anywhere. You can reach any point from any other point. It will be a new way of living,” he says.

The Aeroscraft isn’t like the familiar blimps, although the shape is similar. The exterior is made of a rigid shell of fiberglass and carbon-fiber composite about two millimeters thick, similar to an airplane.

That means that although the Aeroscraft looks like a giant balloon, it wouldn’t fare any worse than a plane in a collision with, say, a bird. “It isn’t sensitive,” Mr. Pasternak says. “You could have a huge hole but you wouldn’t lose helium fast because we don’t keep the helium under pressure. A leak would be slow. As the pressure drops outside, it also drops inside.” 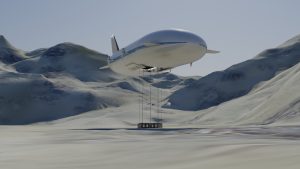 Inside, separate containers, made of high-performance multilayer fabric, hold nonflammable helium. The Aeroscraft operates like a submarine in order to land, Mr. Pasternak says. The pilot compresses the helium to make it heavier than air, and fills the empty space with outside air for ballast.

This technique solves airships’ biggest problem: if you unload 100 tons of cargo, you suddenly have 100 tons of lift, which must be offset with ballast. “It was practically impossible,” Mr. Pasternak says. “It’s why we have no cargo airships, even though they were invented before airplanes.”

Aeros’s technology allows its airship to take off vertically, like a helicopter, or hover for hours over a point on the ground without having to be tied down. The cargo is suspended inside the rigid shell with the helium balloons—and the cargo bay is bigger than any current commercial cargo aircraft. The different airship models can carry payloads ranging from 66 tons to 500 tons.

The Aeroscraft travels at 193 kilometers per hour (120 mph), but could save time, compared with planes, because cargo could be delivered directly to the final destination without having to be unloaded at the airport, then shifted to trucks and driven. “You might see 250-ton airships coming with cargo to a warehouse,” he says.

An airship can stay aloft forever because it doesn’t require energy to stay in the air, he adds. It’s propelled by an electric motor, with the electricity generated by fuel such as hydrogen, natural gas, or diesel. The hydrogen option is “basically like a fuel cell,” Mr. Pasternak says.

We can create transportation means with zero emissions.”

In a feasibility study, the Aeroscraft traveled 12,000 nautical miles (22,224 kilometers) in seven days. “We don’t need anything more than that,” Mr. Pasternak says. At its widest, the Pacific Ocean is 19,000 kilometers; Shanghai to Los Angeles is 10,428 kiliometers. 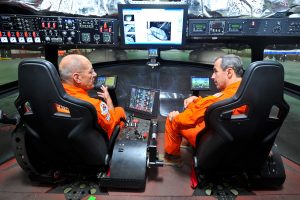 Airship operation is similar to that of a ship, rather than a plane: it requires only two people to operate it, and even then the captain just needs to be available and not necessarily in the seat every minute. But a weeklong trip would require a bigger crew than two, so the crew quarters have bedrooms, similar to cabins on a ship.

An airship can ride out bad weather—its size means it is much less subject to turbulence than a plane—but afterward the structure would need to be inspected, Mr. Pasternak says. Alternatively, it can just go around storms rather than through them.

Airships also could be used to ferry humanitarian aid to areas hit by natural disasters, where transportation infrastructure has been destroyed.

But another application could be commercial, allowing for trade in goods in currently remote locations. “The major problem in development is you don’t have infrastructure,” Mr. Pasternak says. “An airship would allow a factory to go to Africa. You don’t need to build a railroad or a road” to transport the production to market.

The Internet revolutionized the quantity of information available anywhere, compared with libraries that were limited by the number of books they could hold, Mr. Pasternak says. Similarly, the airship will revolutionize distribution by giving anybody anywhere access to a transportation network, he says, adding, “It’s a new way of delivering.”

Photos courtesy of Aeroscraft a