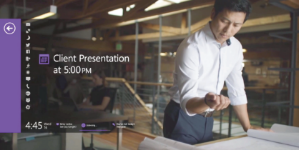 Within the next decade the internet could connect as many as 200 billion things—and not just machines such as cars or household appliances, but anything that you can fit a chip or sensor into—including humans. These devices, collectively known as the Internet of Things, should make life simpler, even healthier, but can we trust them to look after us?

It’s 6 am on Monday 1 October 2025. The device on your wrist has sensed that you’re waking up so it sends a message to your coffee machine to start brewing. You delay the coffee and go for a run instead. While you’re pounding the pavement, the sensors in your earphones detect an irregular heartbeat. The device sends an ECG readout to a cardiologist. He sees that the arrhythmias are just harmless ectopic beats and decides to take no further action.

Back home, you have your well-earned coffee and put the empty cup in the dishwasher. The dishwasher is full, so it starts running. A sensor detects that the appliance is due for a service. It makes the appointment with an engineer and books a date in your diary, which you later confirm. A couple of decades ago, dishwashers were one of the biggest causes of house-fires, but not anymore. The internet of things (IoT)—devices connected to each other over the internet—has made the world infinitely safer. From self-driving cars to smart pills that measure our health from the inside, the internet in 2025 has become a custodian of our health and safety. But have we been wise to give the reigns of responsibility—that we once took hold of ourselves for things like driving or administering medicine—to a device?

Read the Full article to get the answer!

If you want to go further on the topic of the IoT, you can read “What’s next in the Internet of Things?“.