I recently got my hands on a google cardboard to finally get a sense of what the mobile virtual reality (VR) market is like today. While there are an endless number of apps, they seem to be predominantly 360 video viewing or games. As someone who works in retail and loves shopping, I was rather disappointed by the complete lack of viable shopping applications. As a technology that is rapidly entering the growth stage, it is surprising that retailers are not jumping at the opportunity to be at the forefront of this technological shift.

VR in the apparel world has been almost non-existent other than a few companies that have run marketing campaigns; such as River Island’s collaboration with Jean-Pierre Braganza. They created a 3D immersive experience where consumers could fly around as the kingfisher bird featured in the design of the clothing line which although it did create some buzz, it did not provide any information about the products themselves. I was excited last year for singles day when I heard Alibaba was going to be running a VR shopping experience by allowing customers to walk through the Macy’s in New York and select and purchase product right off the racks. It was a great way to introduce the world to VR shopping on a large scale while keeping it a very familiar experience. Although this was massively impressive, it was all accomplished with 360 video which still requires an actual store and physical products. As clothing companies are moving towards designing in 3D, there is unique opportunity to use these designs for an improved shopping experience. I cannot help but feel as though there is a massive missed opportunity to use their assets, leverage the work product, and focus on improving revenue streams. 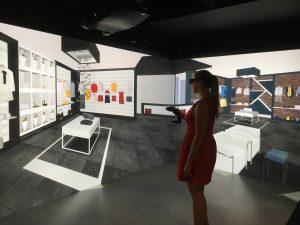 While VR is still very much in it’s infancy from a retail perspective, augmented reality (AR) has been around for a few years and continues to grow. Home décor companies such as Ikea have launched AR programs in the past that allow customers to see how furniture or paint will look in their home. Recently, apparel companies have started to jump in with some in store experiences such as Uniqlo’s Magic Mirror or touching in the mobile world with apps like GAP’s Dressing Room. Both are great examples of where the technology is heading, but are still quite limited. The Magic Mirror still requires consumers to go into the store, and Gap’s app is cartoonish and limited in functionality.

Most advancements in VR and AR in apparel have been concentrated on the consumer facing side, but there are also tools that can be used on the product development side. While companies are implementing 3D design software, they are all using it on flat screens. VR and AR tools can allow designers and product developers to interact with their 3D designed assets in fascinating new ways. For example, they can examine and manipulate the garments digitally as if the product was in their hands. With tools like dream sketcher, they can sketch in midair or markup existing designs as they desire. This opens the world to amazing possibilities giving designers much broader power to use their creativity.

As the trend of VR & AR emerges with the growth of 3D, the importance of having the right digital process is exacerbated. Product data and 3D assets need to be stored and managed in a well-organized, centralized location. The paper “Lessons from the Field: How to Leverage PLM Experiences and Advancements” discusses how PLM is now being integrated with 3D tools. PLM is perfectly situated to leverage these new assets for broader collaboration, extended visibility, and ability to support growing amounts of metadata. The paper examines how it is crucial to fully understand not only where your company is today, but where it is going in the future and plan accordingly. As the move towards 3D, VR, and AR continues, companies are going to need to rethink how they view PLM systems. They are no longer a “nice to have” but instead are foundational to build the digital future.

As I return to playing games on my Cardboard, I can’t help but wonder: what other ways can the apparel industry benefit from emerging 3D, VR, and AR technology?