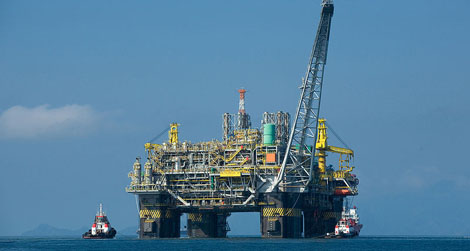 News flash! Oil supply problems solved, four new oil reserves each the size of Saudi Arabia have been found under the North Pole.

Sorry it’s not true! But that’s how much oil we’d need to match our current demand with no growth during the next 30 years. In other words, according to Chevron, we’d need to find the same quantity of oil that we’ve already used during the last 125 years, i.e. 1 trillion barrels!

The Peak Oil debate really interests me. I’m not a geologist, and I know that we keep finding new oil reserves, but it’s becoming clear from expert reports that reserves are running out of that black gold we’re so dependent on, and no matter what some people say (usually politicians or oil producers) we will not be able to meet future demand. With 40% of worldwide traded energy and 90% of transport fuel being oil, what’s the solution?

But that’s not all, even before we run out of oil the car manufacturers have got to respond to very stringent emission regulations (EURO 6 for 2014, etc.) and more importantly have to reduce green house gases like CO² (95g/km by 2020 – today we’re at 160g/km).

It really is “make or break” time for the automotive industry…very exciting and all in my generation!!

So what are the options for automotive engineers? Well, there’s: increasing the vehicle’s energy efficiency to reduce fuel consumption, use fuels which emit less CO², drive electric, etc. Let’s examine…

Energy Efficiency
Improving the energy efficiency of today’s piston engines from a lowly 25% is top priority. Fortunately there are many ways to do this: advanced combustion (HCCI & CAI), reduce friction, hybrid drives to recover energy, etc. Many believe that mild hybrid gasoline engines with turbo charged direct injection will be the norm for 2020. Not easy but there’s great engineering talent out there…

• Bio-fuels? Some countries are investing heavily in producing bio-fuels, but by covering ALL of Europe’s agricultural land only 20% of our current needs in fuel would be covered by bio-fuels! Maybe super fast growing algae will save the day?

• Hydrogen? Seems like the holy grail, but running cars on hydrogen in a large Euro country (i.e. UK or France) would need: 70 extra nuclear power stations per country (today France has “only” 19), or solar panels covering 8,000km² (nearly the whole Parisian region), or a wind farm covering 24,000km² (nearly all of Belgium)! For the fuel cells themselves, I’m sure that we can find a viable solution to replace the rare and expensive platinum catalysts. The real issue is the hydrogen itself. Would you like to sit on a gas cylinder pressurised to 700bar or cooled to -253°C?

But what about the Electric Vehicle?

Now this looks interesting…the electric motor itself is easily a match for pistons engines in terms of acceleration and from “well to wheel” the EV is already 3 times more energy efficient than fuel cell cars and emits 25% less CO² than the best hydrocarbon burning vehicle. If only we could find a breakthrough in storing energy so that we can drive more than 100km and charge up quickly. But we’d still need about 24 extra nuclear power station to charge the batteries!!! Btw, for the batteries there isn’t enough lithium in the world to replace today’s car population.

I really think that the plug-in electric vehicle is the solution, but we’ll also have to radically change our habits and the transport infrastructure. Less travelling and more video conferencing (this will be a huge business in the future I’m sure), only small journeys in personal vehicles, long distance will be by public transport by converting the spider’s web of motorways we have today into platforms for intelligent trains carrying cars with wagons that can break off at intersections…woo I’ve been reading too much Jules Verne!!!

Anyway, lots of critical decisions will have to be made in product development, but maybe the biggest challenge for the automotive industry is to transform their organisations so that they can take these challenges with their suppliers…