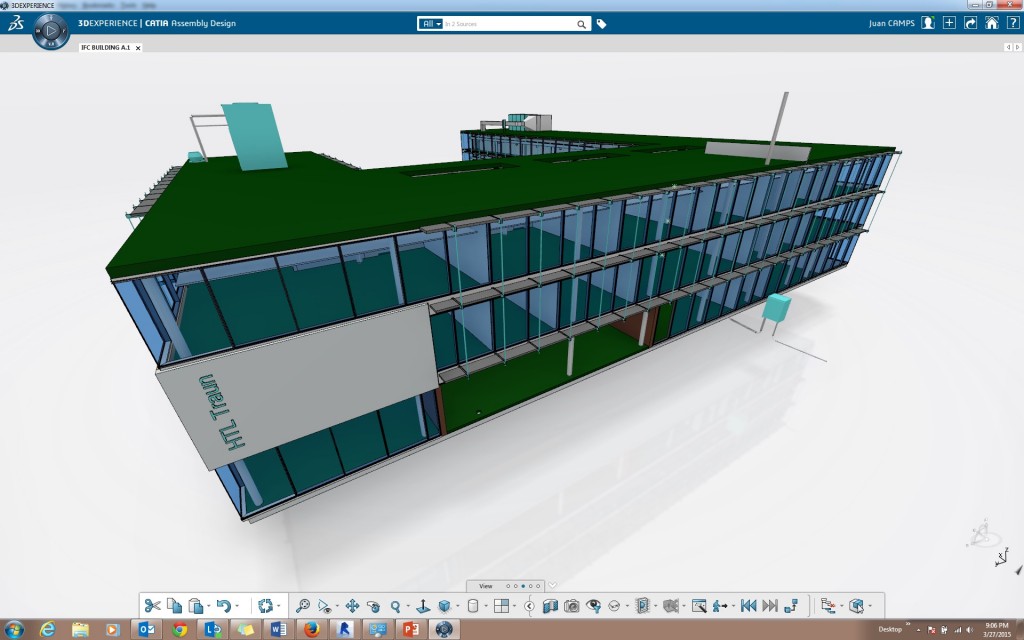 Hector Lorenzo Camps has set his sights on integrating the AEC industry at its earliest stages.

The former architect and current building information consultant teaches a course on the Dassault Systèmes 3DEXPERIENCE platform at the University of Miami School of Architecture with the goal of increasing collaboration in all areas of the industry.

He is educating the next generation of designers and contractors, and as he integrates various departments on the school’s campus, he sees the potential to solve the tremendous inefficiency plaguing the industry.

For Camps, integration — of people, of companies and of technology — is a solution for many of the ills ailing the design and construction industries.

It’s the reason he founded PHI Cubed Inc., a BIM consultancy helping companies integrate their processes and better manage their data as they move to 3D platforms. And the reason the company has found success in its mission is because the AEC industry stands ready to revolutionize design and construction processes and bring new value to every project.

As Camps sees it, the single biggest challenge the AEC industry needs to address is the disconnect between designers, contractors and owners. Each party is siloed in their processes, distanced from their product’s final performance, and focused on serving the best interests of their company over the best interest of the project. It’s a disconnect that creates enormous amounts of waste.

But as Camps points out, “The industry knows it has a problem. The industry feels the pain and suffering of the loss of profit from the current way that it’s working, and it affects everyone from architects to engineers to owners.”

This problem of waste is finally being addressed on a broader scale as several significant changes take place in the AEC industry:

Camps sees integration — not only of technology platform, but of people — as the solution for improving AEC business models.

“We think it’s important to manage information and integrate people before we integrate the building process,” Camps says. “When we’ve done it the other way around, and integrated the building but not the people, we’ve created a people problem. And if you have a people problem, you don’t have buy-in from the knowledge workers in the field or adoption of your solutions. You might have an integrated model, but that model won’t make its way out to the field.”

By integrating people and their processes, Camps believes companies can reduce the tremendous knowledge loss that typically occurs at the end of projects when teams separate. He sees solutions such as Optimized Construction as critical to bringing AEC partners together onto the same IT infrastructure, to better facilitate communication between all parties.

“It’s important to get people to collaborate and to manage not only their BIM, but to manage all the documentation related to construction — this includes scheduling, specifications, 2D-3D CAD documents, installation documents, warranty information, and, of course, change management,” Camps says.

Once design, construction and owner teams are communicating on the same level, then integrated technology can further boost efficiency. However, Camps finds that many software platforms enable the industry’s deficiencies by locking players into a single solution that may not translate from design through fabrication and construction.

With the goal of creating more integrated project documentation, Camps was one of the founders of the buildingSmart Alliance, the North American chapter of buildingSMART International. The organization is dedicated to solving the AEC industry’s interoperability issues by pushing for open BIM standards, allowing all parties to easily access design and construction data no matter what platform they use.

“Our hope is that more vendors will adopt open standards and we’ll be able to share information openly in an integrated way with the platform,” Camps says.

PHI Cubed acts much like a guide in the process of managing the immense amounts of information generated by integrated projects. The company was formed in 2006 with the mission of enabling the construction industry building lifecycle to operate as an integrated enterprise in an effort to reduce errors, waste and time.

The company helps the industry transition from a 2D, paper-based process to an integrated 3D, data-rich process.

“There’s a cultural change that’s happening, as contractors and engineers are starting to rely more on the model and database as their single source of data and knowledge,” Camps says.

While Camps sees this move toward integration as a win-win for all parties involved, he sees the owner as his company’s primary client.

“We find it unbelievable that an owner will spend hundreds of millions of dollars on a project and at the end of the project all they’re given is a box of documents, rolls of paper and CDs, basically told ‘good luck.’ I think owners can expect more,” he says.

Click to Tweet: After an #AEC project, owners should expect more
than a box of docs & “good luck!” @HectorCamps @phicubed1

Camps predicts that as owners begin to see the value they stand to gain from integration, and push for architects, engineers, contractors and suppliers to deliver data directly to an integrated data platform,  they’ll see a level of transparency, continuity and mutual respect that they’ve never experienced before.

“By doing so, not only is that owner more engaged in the design and construction process, but they’re effectively eliminating the hand-off that happens after construction,” Camps says.

Integration among all teams, and data, at the beginning of the design process can simplify the operations process throughout a building’s lifespan — and as more owners recognize this, more designers and contractors will jump onboard.