In some ways Edmondo Occhipinti, founder and director of BIM consultancy 3-im, is starting from the ground up—again.

Occhipinti spent more than eight years with Gehry Technologies, working from his role as a consultant to ultimately manager of the company’s European and South American divisions.

During that time, he grew from an individual with strong technical knowledge of 3D technologies to a manager who taught others how to apply these tools.

Now, in his new role with 3-im, Occhipinti is teaching a whole new group of players how advanced modeling can solve some of the most complex challenges facing the AEC industry.

Click to tweet: “@treiemme is teaching players how 3D modeling
can solve the complex challenges facing the #AEC industry”

Many of these challenges are created by the technology tools used most widely today.

For example, on the project management side, one of the greatest problems Occhipinti sees is the fragmentation among systems.

“Every single department is on its own system,” he explains. “There is no integration among planning, procurement, etc., and everything is spread out on a thousand different documents that are really not connected at all.”

This fragmentation leads to problems in communication, errors and emailed updates that are outdated almost before they are sent.

Then, there are issues of scalability.

Many façade contractors already are using 3D technologies. The challenge, however, is finding a scalable solution that allows them to grow their business beyond one scope. Products suitable for coordinating the sizing of 300,000 cladding panels haven’t always been able to handle the highly detailed engineering of smaller components — or smoothly interface among these details.

3-im, a Dassault Systèmes partner, has heard time and again the surprise of clients who realize a solution already exists that can improve coordination among trades and components.

That surprise often comes because the Italian industry is relatively new to 3D design possibilities.

The country is home to some of the strongest construction companies in the world, particularly in the field of infrastructure. Many of these players have branched out worldwide and have led to the rise of smaller supporting players.

The painful irony, however, is that many of these companies are struggling in the regional market, even as they grow internationally, due to the ongoing economic crisis inn which Italy is mired.

It’s within this unique contradiction that Italian contractors are beginning to ask about 3D technology. Occhipinti notes that as a result of these economic forces, Italy has been moving much slower than some of the Northern European countries into its use of technology tools.

“What we’re seeing is these companies that are now technically very strong, but technologically very weak,” Occhipinti says.

That is about to change.

A Partner in the Process

Because many of these contractors have offices around the world, these Italian companies are comparing their capabilities to joint venture partners that are prepared to bid on projects requiring 3D delivery.

This recognition is leading many regional projects to seek out partners such as 3-im.

“They are looking at partners in Italy and thinking ‘if I want to get more competitive abroad, where my main market is, I need to be able to compete with the others and bring myself to another level. How do I do that?’” Occhipinti has found.

It’s a question that 3-im is well suited to answer. The company is made up of Italians whose careers have been built on technologically complex projects entirely outside of Italy. Since arriving in Italy in 2013, the company has established work with several major contractors, and is setting out to wow the rest by way of example.

Among those examples is 3-im’s current work with Morphosis Architects on the San Donato Milanese headquarters of Eni S.p.A., the Italian oil company with worldwide operations. 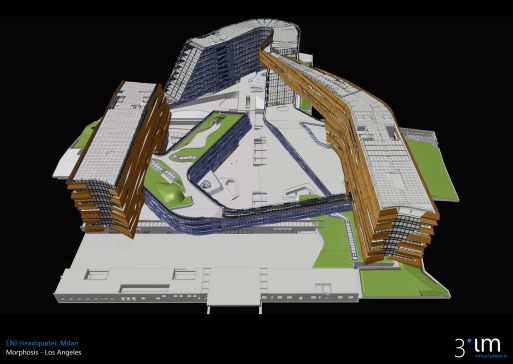 The 117 million EUR complex will feature three buildings covering 120,000 square meters. Each building will be connected by various platforms. The double-skin façade is designed with a level of geometric complexity that made 3D design a near necessity.

During its design development, Eni decided to implement a BIM process for the design allotment, construction documents and tendering process. “It was looking for a partner that had the experience to run this particular process,” Occhipinti said.

At the start of this project, 3-im found a partner in Dassault Systèmes, finding the company’s 3D technology the perfect product for defining the scale and complexity of the Eni project.

For nine months, 3-im experts have worked to build a dense 3D model for the project, bringing it to LOD 350, which not only represents the shapes and sizes of specific object, but also the interfaces among building systems. 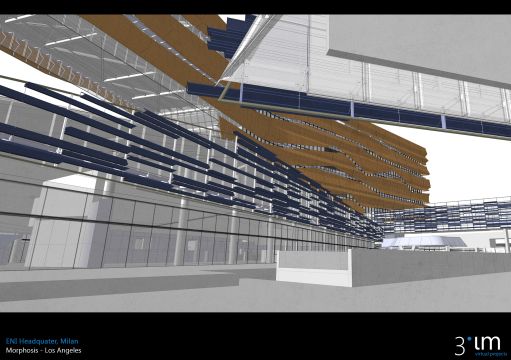 Despite the challenges facing Italian design and construction companies, and their partners around the world, Occhipinti sees major opportunities.

“We are living in an extremely complex moment where the global economy is shifting from one phase to the next, and this shift is a great opportunity for every industry to think about itself and propose new ways of improving processes,” he says.

As he points out, the construction industry is infamous for its inefficiency, so at this point there are no wrong answers — except for maintaining the status quo.

“Things like this don’t happen quickly,” Occhipinti adds. “When I started in this industry more than ten years ago, people were saying ‘in five years BIM is going to be standard.’ Five years later we heard the same thing. Things take time to change — and that’s good for us. We have the time to bring new value to the market.”

Akio Moriwaki
Dassault Systèmes’ head of global marketing for the Architecture, Engineering and Construction industry, Mr. Moriwaki led the launch of the groundbreaking Lean Construction Solution Experience and is a member of buildingSMART.