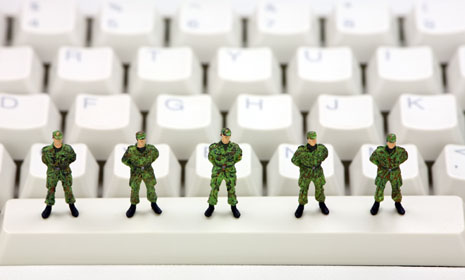 The RAID elite team (the French SWAT if you prefer) are called “when no one else can do the job”. Hostage situations, dangerous criminals and armed gunmen going nuts are their targets and you can bet mistakes cost a lot more than just a few bucks or a broken window… Kind of scary right?

So obviously they want a risk-free training and that’s no surprise they turned to serious gaming to improve their preparation, the army has been doing so for years now.

So what’s the situation like? Basically, RAID people are dedicated to 200 French sites labeled “high risk”, either because they are heavily populated or because an attack can cause extreme material damage. And even if they train regularly, it is not always possible to obtain unlimited access to certain sites – a nuclear station or a train station for example.

The more we understand what’s waiting for us, the faster we can go in and do the job. It considerably reduces the risk to our team and the people we need to save.

So the point of the serious game is to digitize these 200 places and not only the building but also its content (means of access, obstacles, doors, ducts, outer surroundings). All this is under process with the 3DVIA team: with the help of 3DVIA Studio Pro, they create immersive 3D simulations of intervention scenarios.

The RAID team now has a better understanding of the area they have to work in: “team members all confirmed that when they actually entered the ship [they studied beforehand], it was as if they had already been there before.”

The nice thing is that they have different scenarios (and thus tactics), different weather and lighting conditions and so on… in other words, a lifelike experience! 🙂

Next step is to update the 3D model in real time as the situation evolves (say hostages are moved to another room) so that it enables RAID people to modify their strategy instantly and tell their troops on site… exciting huh?