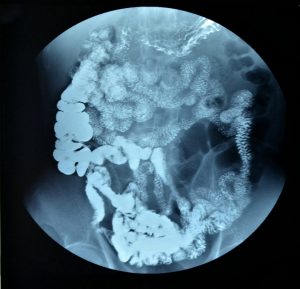 A team in Luxembourg has developed a machine that can mimic the physical and biological conditions inside your digestive system. Just add a pinch of your personal microbiome and watch how your body would react to certain foods or drugs. Is this the future of personalized medicine?

At a microscopic level, about 100 trillion bacteria live in and around your body, with a large proportion residing in your gut. The kind you find in yogurt and fermented tea, Lactobacillus acidophilus, is one of the most common, but there are hundreds of varieties. Each individual has a slightly different mixture of bacteria, and it’s known as your “microbiome.”

Medical research has begun to pay more attention to these gut flora since 2012, when the NIH, FDA, and DARPA began funding studies into machines which might explore the link between your microbiome and your risk for diseases like diabetes, obesity, IBD, and Crohn’s. Even some neurodegenerative diseases have been shown to have some link to your bacterial cocktail, and research suggests these critters have an effect on your everyday cognitive functions, too.

Until recently it has been impossible to actually use these gut flora outside the body—to simulate a real human reaction to a drug compound, for example. If put in just the right environment, such a simulation could help doctors predict an individual’s response to pharmaceuticals, foods, allergens, supplements, and environmental factors, opening up the promising possibility of creating personalized treatments that could drastically reduce the likelihood of disease, drug interactions, and costly post-hoc treatments.

The implications for drug personalization are particularly profound. According to the FDA, adverse drug reactions are the fourth largest cause of death in the United States, causing over 106,000 deaths annually. Stimulated human organs, such as a machine-based human gut, offer the opportunity to run predictive pharmaceutical tests on the efficacy and safety of various drug compounds. The findings from such tests could inform which drugs doctors choose to administer to patients and reduce the likelihood of drug interactions in individuals being treated for more than one condition.

What’s so hard about simulating a human organ?

“In the gut, you have really strict requirements in terms of the oxygen concentrations,” says Pranjul Shah, PhD and cofounder of Orgamime, the Luxembourg-based biotech startup whose gut-on-a-chip machine received wide acclaim in June 2016 following the publication of its white paper in the journal Nature.

The challenge, Shah says, is reproducing the exact bacterial habitat as it exists inside the intestines, a complex task. “Human cells need oxygen to survive and thrive, [but] the bacteria need to be in a steep, zero-oxygen environment,” says Shah. In the gut, two environments—aerobic and anaerobic—exist within a few microns of each other. It’s hard to build a machine from plastic and simulated mucous that can do the same thing. “This gradient is so steep that many other systems which have tried to do that have failed to achieve it,” he says.

Plus, the machine needs to reproduce the physical changes caused by food material passing by, an effect called “shear.” “The bacteria are used to some kind of shear in the gut because it’s a constantly pulsating environment,” says Shah.

Will gut-on-a-chip machines change what you choose to eat?

The food industry, rife with pseudoscience, will also be transformed. While machines like Orgamime’s can facilitate personalization of drug compounds, they could also be used to verify food manufacturers’ health claims, or definitively prove whether ingredients like high-fructose corn syrup are actually bad for humans.

“There have been a couple of papers which came out very, very recently that say that artificial sugars—not natural sugars, but artificial sugars—are really a big problem,” says Shah. The true link between high-fructose corn syrup, gut flora, and diabetes might be deduced using gut machines like Orgamime’s. Shah, whose family has a history of diabetes, has already stopped consuming high-fructose corn syrup. “If you get the Mexican Coca-Cola, it’s real sugar,” he says. “Even when I’m traveling in the US, if I have an option, I ask for the Mexican Coke.”

Also on trial will be yogurts, the health claims of which will have to be substantiated with data, Shah predicts. “We’re getting a lot of requests from companies which are selling off-the-shelf probiotics which claim to boost your memory or help you lose weight,” he says.

Straight-up bacteria might even become a food group, of sorts. Bacterial transplants, already shown to be effective for treating the GI tracts of immuno-suppressed individuals, might become commonplace for all patients after a surgery or bout of illness. Family members might lend you their strains, or doctors might mix up completely artificial cocktails as substitutes and test their effects in a machine. The point is, it will be highly customized to you.

“A most suitable donor could be chosen based on your genetic makeup, the current system of bacteria that you have, and your diet, your stress level, your lifestyle, and the environment that you live in,” says Shah.

How can we prove the gut-on-a-chip actually works?

Shah began working full time on his machine in 2011 alongside Orgamime’s cofounder Sivakumar Bactavatchalou. Though it began while Shah was a PhD student in life sciences, the project now incorporates recent advances in electrical engineering, IT, and 3D printing. It is comprised of eight computer-controlled bacteria chambers, each of which mimics a different segment of the human intestinal tract.

To prove their simulation was accurate, Shah and Bactavatchalou conducted two published clinical studies (one in Europe, one in South America) to see if they could predict human subjects’ reactions to probiotics. Patients were first endoscoped to take a sample of gut material, then given six weeks of probiotic therapy with a live culture known as Lactobacillus rhamnosus, or LGG, commonly found in yogurt.

In gut science, one marker of impact for a probiotic supplement is your body’s secretion of proteins called cytokines, which send signals to other cells. Whether or not these cytokines are pro-inflammatory—a sign the body is being attacked, and invoking an immune response to deal with the threat—can be assessed by looking at the RNA excreted by the cytokines.

When Shah tested his patients’ RNA secretions alongside the Orgamime simulated gut, the results were identical. “We took the same bacteria, same type of cells, same conditions—and we see exactly the same genes to be influenced in our system at the molecular level,” Shah says.

What this means for existing drugs

About 30 percent of new pharmaceuticals fail in human clinical trials despite promising animal tests, according to the NIH. Orgamime’s technology could call into question every compound discarded by drug companies over the past 50 years. Those compounds can now be re-assessed for usefulness as a result of the more accurate simulated-human testing that has become available. Anywhere from 300,000 to 500,000 discarded compounds could be re-tested.

“I expect every pharmaceutical industry will open up their closets to startups,” says Shah.

But first, the FDA must approve the validity of machines like Orgamime’s. The department has announced it will begin clinical trials sometime in 2017. “If something like this happens,” says Shah, “it’s going to be the biggest game changer in the field of medicine, at least in the drug testing and development, in the last 50 years.