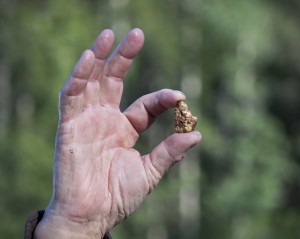 The future gold rush might be to a sewer near you. Municipal sewage contains many metals, including gold, silver and platinum. Concentrations vary by metal, but municipal sewage tends to contain about one part per million of gold. This “isn’t a lot, but for gold it’s significant,” says Kathleen Smith, research geologist at the U.S. Geological Survey, and an expert on metals in biosolids.

Biosolids (treated sewage sludge) are more commonly understood as fertilizer. “It’s high in phosphorus and slow-release nitrogen,” Dr. Smith says. Around half the roughly seven million dry tonnes of biosolids collected at U.S. wastewater treatment plants is recycled as fertilizer, including in public lands and forests.

But while copper and zinc, for example, are essential for plants and animals, these metals may become toxic in high concentrations, hence the need to monitor and regulate the chemical and metal content in waste.

It’s not just the regulated metals such as copper and zinc that now attract attention. “The presence of some valuable metals—such as gold, silver, platinum, and palladium—is [also] of interest, due to their concentration levels,” Dr. Smith says. 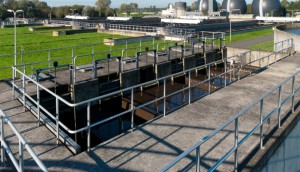 In the mining industry, sought-after metals are dispersed. “You have to spend a lot of money and move a lot of rock to get at the metals,” Dr. Smith explains. Recovering metals from sludge, however, is easier. It also complements traditional mining and can be undertaken in any market.

From a sustainability point of view, we’re…trying to find a way to extract metals from [waste streams] that contain large amounts of metals, versus just throwing them in a landfill and dealing with the effects of having the metals dispersed in the environment,” Dr. Smith says.

There’s also money to be made. Arizona State University researchers calculate that a million-strong community produces $13 million worth of metals in biosolids annually. The most lucrative elements—silver, copper, gold, phosphorus, iron, palladium, manganese, zinc, iridium, aluminum, cadmium, titanium, gallium and chromium—have an estimated combined value of $280 per ton ($308 per tonne) of sewage.

Scientists at the Swiss Federal Institute of Technology Zurich, for example, are working on a thermal-chemical process to decontaminate sludge, remove harmful heavy metals, and retain the phosphorus as fertilizer.

Meanwhile, JBR Recovery Ltd., in West Bromwich, U.K., has developed a commercially-viable method to recover silver and other precious metals from industrial sludge. Simon Meddings, JBR’s managing director, explains the process. First, a rotary kiln uses combustible silver-bearing waste to dry out most of the moisture. A high-carbon ash is produced—increasing the volume of metals to 10% to 15% from around 0.2%—and placed into a lead-based blast furnace. The lead collects the precious metals, and slag is dispersed through a tap hole at the front of the furnace. The alloy of lead and precious metals then goes into a cupellation furnace, which oxidizes the lead, allowing it to be poured off the top. The remaining bath of molten metal—around 98% pure silver with gold and other platinum group metals present—is cast into bars. These go into moebius cells where an electrical current refines the silver to 99.9%, and collects and refines the gold and platinum separately.

Sludge suppliers are paid according to how much precious metal is extracted and sold, less treatment and refining charges. The photographic industry and chemical production plants are major customers (photographs and x-rays in particular having high metals content).

Nonetheless, many large companies overlook their waste streams, and simply contract waste management companies to dispose of their sludge.

You’d be surprised how much ends up in landfill,” Mr. Meddings says. “People are not aware of the value in it.” They might take more interest “if they know they can get a financial rebate.”