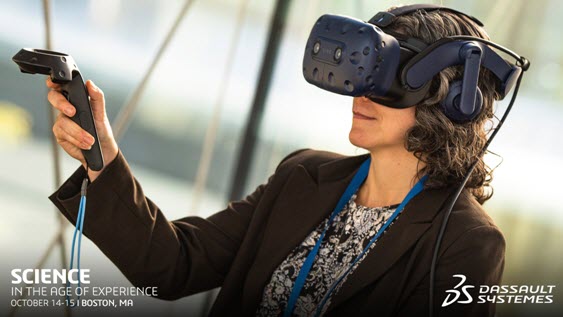 Before we start in on the highlights from Day 2 of Science in the Age of Experience, lets take a quick look back at the excitement from Day 1:

Yesterday, more than 15 speakers took the stage at Boston to discuss how science will revolutionize industries across the world. Here's a quick summary of what took place at Science in the Age of Experience, 2019: https://t.co/2mdAYja1XL pic.twitter.com/rn01Dp28eP

First up on Day 2 is a keynote address by Dr. Michio Kaku, Theoretical Physicist, Professor, Futurist and New York Times best-selling author. He’s an acclaimed speaker and popularizer of science. Known for his ability to challenge his audiences to think outside the box while still making complex concepts understandable, accessible and relevant, he didn’t let us down.

Dr. Kaku began his talk with the question he’s asked scientific luminaries in over 300 interviews: “Is there intelligent life…on earth?” But then, he went on to list what he called the 10 challenges for the future:

He also asked – “Where does wealth and prosperity come from?” His answer – from Science and technology; and he says it comes in waves.

Wave 1 was in the 1800s and involved the discovery and application of thermodynamics with the steam engine. Wave 2 was around 1880 with the Electric Age. Wave 3 came with the transistor and quantum theory in the 1960s. He posits that Wave 4 will be Physics at the molecular level; and Wave 5, Physics at the atomic level. All this is in the near future; in fact, the second half of this century.

"What is the fourth wave of wealth generation that will turn society upside down? I say the fourth wave is physics at the molecular level, nanotechnology and biotechnology.”- @michiokaku at Science in the Age of Experience, #live now. pic.twitter.com/BV2oytmFrj

“Virtual reality is not only for children. We will have virtual reality in every aspect of life to visualize complex phenomenon," says @michiokaku at Science in the Age of Experience, Day 2. pic.twitter.com/iLOw7VpQ3J

"Every industry will be digitalized, analyzed and visualized….Data will pretty soon replace crude oil and become more precious – just like crude oil, data will have to be filtered & refined" Amazing @michiokaku with @Dassault3DS at #3DEXPERIENCE @3DEXPERIENCELab pic.twitter.com/6zgD1dvGau

The next speaker was Dr. Geneviève Berger, Chief Research Officer at Firmenich.  She also served as Chief Research and Development Officer and member of the Leadership Executive team at Unilever (2008 to 2014), is the author of many patents and publications, has practiced medicine (medical doctor and professor), as well as managed one of the world’s largest research institutions, the CNRS.  Additionally, she has held key business roles as Non-Executive Director, Smith & Nephew PLC (2010-2012) and Non-Executive Director, Unilever (2007-2008). Dr. Berger holds three doctorates, in Physics, Human Biology and Medicine, and has been recognized by Fortune Magazine as one of the most powerful women in business.

Says Geneviève Berger of @firmenich, "All consumer products, one way or the other, if they want to be successful, need to have a positive impact on the quality of life.” pic.twitter.com/QMIYbrGldy

"The current trend is for natural products. I recently noticed that vegan shampoo is in the market. Now, no one, I think, is eating the shampoo, but natural products are still in demand today."- Geneviève Berger of @firmenich. pic.twitter.com/wlu5m5SWvE

Next, David Holman,Vice President R&D and SIMULIA Brand Leader at Dassault Systèmes overseeing all simulation strategy, hosted a panel to explore what is driving product innovation that boosts business and customer experience, what are the big disruptions, and how science and technology are coming together to change the face of innovation.

The panel featured Patrizio Carlucci, Head of Innovation Lab at ECCO Sko A/S. Patrizio is an industrial designer by trade and always passionate about innovation, experiencing first-hand the profound transformation of design and engineering processes related to product design and development.

“Sometimes when product sensors are embedded in a proper way, it can give us good feedback. Just finding out about someone once measured gives us a plethora of opportunities to be exploited.”- Patrizio Carlucci, ECCO, Sko A/S. pic.twitter.com/R25ZEw8bND

Landon Taylor is Chief Executive Officer of Base 11. He is a seasoned operator and corporate strategist with 25+ years of experience in maximizing revenue, increasing earnings and strengthening the brand reputation of large, complex businesses. In his current role with Base 11, Landon drives the organization’s strategic vision and growth, resulting in the national expansion of the company’s STEM regional ecosystems.

“We are all about demolishing barriers. We’ve accelerated 8,000 students in their careers, particularly in the computer sciences field.”- @LandonVTaylor, CEO of @Base11STEM at Science in the Age of Experience 2019. pic.twitter.com/d7l3zGkf2i

Arthur Dubois is the head of Analysis & Stress at Joby Aviation, an aerospace startup based in Santa Cruz, CA. Joby focuses on enabling Urban Air Mobility solutions through electric Vertical Take-off Aircraft operated as air taxis. Arthur is a longtime simulation expert who has adopted the 3DEXPERIENCE platform. He holds a Mechanical Engineering Degree from McGill University and a Master in Aerospace Engineering from Stanford University.

"We’re working in a constrained design space, and if we don’t customize our parts, we will not succeed.”- Arthur Dubois, head of Analysis & Stress at Joby Aviation at Science in the Age of Experience, 2019 #live now. pic.twitter.com/VxRZj10hXM

For the event’s final keynote, we had Neil Gershenfield, Director of Center for Bits and Atoms, MIT. Dr. Gershenfeld’s unique laboratory is breaking down boundaries between the digital and physical worlds, from pioneering quantum computing to digital fabrication to the Internet of Things. Technology from his lab has been seen and used in settings including New York’s Museum of Modern Art, rural Indian villages, the White House, the World Economic Forum, inner-city community centers, automobile safety systems, Las Vegas shows and Sami herds.

“Most of what governments and businesses do, you don’t need if consumers can become creators.”- Neil Gershenfeld of @MIT at Science in the Age of Experience, 2019. pic.twitter.com/ou0sqhzjEF

"Evolution isn’t random. The heart of evolution is that it works over a carefully curated space. And that is the very insight of deep learning.”- Neil Gershenfeld of @MIT at Science in the Age of Experience, 2019. pic.twitter.com/gWnuMlmPDs

These two days at Science in the Age of Experience have been an amazing journey of discovery into what science delivers.

We have brought the virtual and the real much closer together

We have seen that science and technology are changing the paradigm for better living, product innovation and sustainability of our planet. Without science, we cannot rise to the environmental and societal challenges that we face.

Thanks to our speakers, participants, attendees — everyone for their presence and enthusiasm.

See you next year!

As a professional writer in science and technology for over 30 years, I enjoy having a front row seat to the revolutions and innovations in how we live and work.