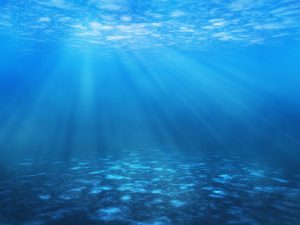 A combination of technological advances, from such unrelated fields as smartphones, sensors and robotics, is pushing deep-sea mining closer to reality.

The sea floor is particularly rich with precious metals—more so than land deposits. Seawater seeps through cracks in the volcanic rock on the ocean floor along the edges of the Earth’s tectonic plates. Underground, the water is heated by the nearby magma. It dissolves the metals in the rocks then is spewn out through hydrothermal vents in a liquid “smoke” of fine mineral particles. The particles react with the cold sea water and settle to the ocean floor, creating deposits, called seafloor massive sulfides, that can be 10 to 20 times higher grade in minerals than those on land.

The main hurdles to mining these deposits have been technological. “There’s no wifi, no cellular service,” says Justin Manley, president of Just Innovation, a Boston undersea technology and robotics-consulting firm. Sound waves travel much more slowly underwater than through air, “so you can’t get the same kind of bandwidth” for communicating with the robots, he says. Equipment needs protection from the corrosive saltwater; the cold, which can decrease batteries’ power; and the pressure, which increases by one atmosphere for every 10 meters of depth, he says.

“People can’t dive to 1,600 meters,” says Mike Johnson, chief executive of Nautilus Minerals Inc., a Toronto-based company that’s the first commercial enterprise to develop a seafloor production system for deep-sea mining of massive sulfide systems. Nautilus was granted a mining lease in 2011 by Papua New Guinea for an area called Solwara 1 in the Bismarck Sea in the southwestern Pacific Ocean. Mining hasn’t yet begun, as parts of the seafloor production system aren’t yet completed.

Now we can do everything robotically,” he says. “In the short time we’ve been going seriously, about 10 years, I’ve seen huge changes in the quality of the technology, particularly things like mapping. A lot of the technology for sonar is developed in the military then declassified and put on the market. Similarly, there have been huge advances with battery tech and computing power.” 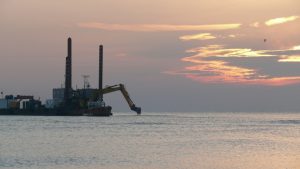 A standout technology for Nautilus is a heave-compensated crane. The crane is on the ship to lower machinery into the water. This crane can hold the machinery exactly, say, 10 meters off the sea floor in order to stabilize it during precision work.

“Computers on the crane talk to computers on the boat,” Mr. Johnson explains. “They figure out where the hook of the crane is in 3D space. As sea swells come through, the crane takes in and lets out wire to make sure the hook stays in the exact position relative to the sea floor. It’s amazing to see. The hook hardly moves—we can watch it on video—even though the boat goes up and down all the time.”

A special ship is being built for Nautilus for the operation. It will have a moon pool, or a hole in the middle. The equipment, such as the pump and riser system, descends through the hole so the vessel sits directly above the pump. The vessel has to stay in place on a moving sea—called dynamic positioning. The ship’s computers talk to satellites to engage the propeller systems so the vessel doesn’t move more than two meters from a point on the sea floor, he says.

The riser was designed for the oil and gas industry to clear out the cuttings from deep-sea drilling, rather than to let them dissipate on the ocean floor. Deep-sea mining won’t dig below the surface, but will remove mineral-rich formations on the sea floor. A large central pipe will ferry slurry with the mineral cuttings up to the vessel, while two smaller pipes on the sides will send the seawater back down.

The seawater is filtered to four microns, or about a quarter of the thickness of a hair, “so we don’t return much,” Mr. Johnson says. And, on the advice of marine scientists, the water isn’t simply dumped overboard because the pH and temperature of water at 1,600 meters has a different pH level and is far colder—about 2.6 degrees Celsius—than the 30-degree Celsius surface water.

Different kinds of robots do the work. Autonomous underwater vehicles, or AUVs—torpedo-shaped robots loaded with sensors—go back and forth over a selected area, like mowing a lawn, to detect changes in the water’s chemistry (temperature, pH, turbidity) that can signal the presence of mineral deposits, says Mr. Manley of Just Innovation.

AUVs, which also are called unmanned undersea vehicles or UUVs, can be specialized to gather images from an area of interest, to create detailed maps.

Then the work is turned over to remotely operated vehicles, or ROVs, which remain tethered to the ship by a thick cord carrying electrical and fiber-optic cables. An operator on the ship, who watches the action via television screens, directs the ROVs. One kind of ROV, about the size of a small car, collects samples. The actual seafloor production tools that cut and collect the rock are massive—about 14 meters high and 16 meters long and weighing 300 tons, Mr. Johnson says. Because ROVs get electricity from the ship, they can stay underwater longer than the 18 hours of battery-operated AUVs.

With regulation and monitoring to ensure it’s done correctly, undersea mining could have a much smaller environmental impact than mining on land, Mr. Johnson says. The higher grade of mineralization and its concentration means less area is affected. The process has no tailings, because even the iron pyrite around the precious metals gets used. It doesn’t affect fresh water or human habitats.

It will have such a small footprint, compared to a mine on land. To stop a rush to the bottom we need good regulations and the system needs to be transparent.”

Perhaps technology will be the answer. Some underwater and surface robots are being developed that could stay in place for a year, Mr. Manley says, potentially offering a way for regulators to monitor mining sites remotely.