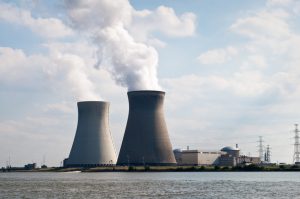 Nuclear power plants last a long time, but not forever. Around the world, 158 nuclear reactors have been permanently shut down, although only 15 have been fully decommissioned, or dismantled. The U.S., which has by far the most nuclear facilities, has decommissioned 10 commercial reactors and has 18 others going through that process. Germany decided in 2011 to phase out nuclear power entirely by 2022.

The question of how best to dismantle nuclear power plants will continue far into the future, considering that 60 reactors are under construction now, and that nuclear plants operate for 30-60 years.

“Our reactors had an initial design life of 30 years,” says Jerry Keto, vice president of nuclear decommissioning for Ontario Power Generation, which operates 20 of Canada’s 22 reactors. “But in operating them, we have confirmed that the plants can run much longer. Most plants in the U.S. and Canada confirm through aging-management programs that they’re fit.” 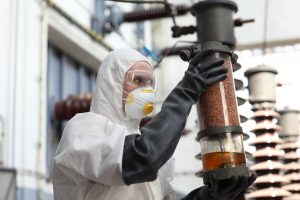 Some countries choose to dismantle and decommission their nuclear facilities immediately after shutdown. Some prefer deferred dismantling and delay the process for several years. Others choose entombment and convert theirs into waste-disposal facilities, after ensuring that the targeted end-state of the facilities is safe, according to Michael Siemann, head of the Nuclear Energy Agency’s division of radiological protection and radioactive waste management, part of the Organization for Economic Cooperation and Development (OECD).

“The choice of approach depends on many factors, some of which may be related to national circumstances,” Dr. Siemann says. “Nevertheless, immediate decommissioning is usually considered as the preferred strategy, meaning that the shutdown nuclear-power plants are usually dismantled and major parts also completely removed.”

One of the challenges in decommissioning is that for “some plants designed in the 1960s and ‘70s, not a lot of attention was given to fact that somebody has to take them apart in future,” Mr. Keto says. “Now, decommissioning is entrenched in design for new construction. The new reactors being built in the United Arab Emirates were designed already thinking of how they will be dismantled in the future.”

The age of many plants means that their original designs were on paper. “The main problem is there is so little information about the state of the buildings. The plans of the plants were mostly nondigital,” says Joseph W. Dörmann, mechanical engineer at the Fraunhofer Institute for Material Flow and Logistics, in Dortmund, Germany. “While the plant was running for 30 years, there were changes to the building. It’s really difficult to have a clear 3D model of the plant. It’s difficult to find out where, for example, radiation has had an impact. You need a lot of time to develop the information, to know which part of the plant can be demolished, by which technology, and whether to bring to safehouse”—a special nuclear-waste repository—“the nuclear waste or materials that have had contact with nuclear waste.”

Rather than try to digitize paper designs, OPG makes scans of the plants, “so we’re less reliant on what the paper says and totally reliant on the real area. Especially in high-radiation fields, it’s not a place for sending workers,” Mr. Keto says, adding that digitization is needed so that machines can be programmed to do the work automatically.

Where workers are needed, OPG even builds exact replicas of the area for training and practice, so that when workers enter a radioactive zone they can get the work done in the shortest period possible. OPG hasn’t yet decommissioned full facilities, Mr. Keto says, but it has “done some very highly radioactive work in our plants. We have permanently shut down two reactors and laid them up for future dismantlement.” 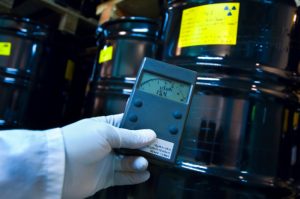 Only a small part of a typical nuclear plant is highly contaminated, with slightly more low-to-medium-level waste. About 90%-95% of a nuclear plant isn’t radioactive at all and can be demolished like any other industrial building, with waste taken to landfills or recycled, Mr. Dörmann says.

The walls of such plants can be 1.5 to 2 meters thick, and even in contaminated areas only the first 2-5 centimeters may be affected, he says. New cutting techniques, cameras and robots allow the contaminated part to be removed separately.

Concrete may be blasted with dry-ice pellets rather than sand, because dry ice disappears when it melts, whereas used sand must also be disposed of as contaminated waste. Scabbling is another technique for removing a layer of concrete. Rubble is then cracked into morsels smaller than 2 millimeters.

Non-contaminated material can be recycled as sand, concrete and metal. Parts of Germany’s Jade West Port on the North Sea used materials from a demolished nuclear plant, Mr. Dörmann says, adding, “It’s a way to do recycling on a large scale.”

The steel bars reinforcing the concrete can be melted down and recycled. Metal that’s slightly contaminated is turned into shield blocks for use at other nuclear facilities.

Nuclear facilities can’t be retrofitted into conventional power plants because they aren’t built for the same levels of heat, and the turbines are different, Mr. Dörmann says. However, the office buildings and even some other facilities can be renovated for new uses. With cooling tower foundations 18-21 meters deep, keeping them and building a new facility, such as a logistics center, on top would vastly reduce the amount of rubbish, he says.

“Given the low number of only 15 completed decommissioning projects world-wide,” says the NEA’s Dr. Siemann, “it is too early to draw conclusions and to derive trends in the reuse of entire sites after decommissioning completion.”