Your team has invested several months developing an electrical component for a new defense system and today is the day you’ve been working toward: it’s time to power up the prototype.

For most teams, this is a moment of great anxiety. Defense systems are complex, and each part relies on another to function holistically. If one connection is missed, if one part fails, the whole system is ended.

When failure occurs, it adds time to the development process – 50 cycles of troubleshooting and problem resolving are often required. There are no hard and fast rules for problem solving at this stage and one fix can lead to a handful more. Before you know it, your design timeline has spiraled out of control and your problems are intensified. Now sales must answer to a customer that is becoming increasingly frustrated, because the system’s capability is late and at risk of becoming obsolete before it has even shipped. 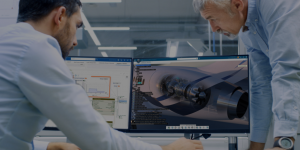 Failure in design is common and costly. But innovators in the space are seeking solutions that allow them to avoid the vicious cycle of spiraling timelines. That solution lies in model-based systems engineering that enables teams to consider thousands of alternatives in a fraction of the time.

Of the US Department of Defense’s 93 major defense acquisition programs (MDAP), each one is delayed by an average of two years as of 2020. Additionally, the projected cost of the MDAP portfolio stands at 54% higher than the forecasted kick off cost at a total growth of $628 billion. That’s the equivalent of approximately 7,850 F-35A fighters.

So why, in the era of advanced manufacturing, when system advancements are at their peak, are these problems so common?

The reason stems from the sophistication of technology. Military platforms and their networked characteristics are challenging to develop. Designing a system-of-systems that integrates seamlessly is complex and requires a lot of work to be successful. Moreover, not only is the hardware element a challenge in modern systems, but so is the software that underpins it all.

Each engineering discipline is often operating on best-in-class software for that specific function. Everything operates within its own ecosystem, despite each function having a profound effect on every other one, which is chaotic to say the least. What is often missing is a digital thread that links every discipline and process, from initial concept to manufacturing. Such disarray is not what customers expect from advanced defense manufacturers, but this reality is common across the industry.

How can we simplify complexities to increase efficiencies across all stages of program development and reduce the acquisition lifecycle? Model-based systems engineering.

Introducing traceability across all processes, digital mission engineering is the optimal way to provide an integrated framework to model all facets of the development. This includes multi-disciplinary simulation of the system, its subsystems, the component design, and the associated processes.

The benefit? Thousands of alternatives are considered in a fraction of the time it typically takes to integrate modules, carry out the checks and start the power supply. Identifying problems at the modeling level introduces risk reduction ahead of any physical assets being developed. This avoids that dreaded eventuality that the prototype you’ve worked hard to develop fails to power up.

Dassault Systèmes’ investment in its 3DEXPERIENCE modeling and planning platform can reveal, manage, and facilitate the intersections among disparate disciplines across the entire process. Every engineer works natively on the 3DEXPERIENCE platform and stores data digitally, and the platform tracks interdependencies that integrations cannot. Ultimately, the platform puts everything at the fingertips of everyone, eliminating the problems that a siloed approach can bring.

At the end of the day, this results in programs being delivered on time, on budget, and meeting all requirements. A success all round.

Vice President, Aerospace & Defense, David Ziegler leads the Dassault Systèmes Worldwide Aerospace & Defense Business through the development of its Industry leading Solution Experiences, based on the 3DEXPERIENCE platform. Prior to Dassault Systèmes, David held multiple positions in the Aerospace industry, including 12 years at Airbus both in France and the U.S., holding positions in Strategy, Sales and Business development, and most recently at Aéroports de Paris. A French citizen, David’s career in aerospace began when he obtained his Masters of Science in Aerospace Engineering from Supaero, followed by an MBA from INSEAD. Passionate about everything that flies, he also enjoys kite-surfing and spending time with his wife and two children, when he is not on a plane.