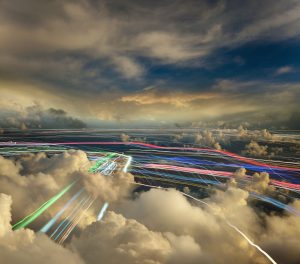 Most of the world can’t afford mobile data at current prices. About 43% of the world’s population can afford 500 MB of mobile data a month right now. In order to double that number, data costs have to fall by 70% globally, according to a new study by Strategy&, a unit of the consulting firm PwC.

The study, conducted for Facebook’s controversial Internet.org initiative, which aims to provide internet access to currently unconnected populations, defines “affordable” as a prepaid data plan that allows up to 500 MB of use a month, and costing 5% or less of a person’s gross monthly income. Even those assumptions may be conservative. The average user in a rich country uses 630 MB of data a month, and that figure is kept low because of widespread availability of wifi networks, some of which are free. If WiFi use is taken into account, rich-country users eat up 2 GB of data monthly, according to the report.

What does 500MB of data get you? Every day, 800 plain-text emails, or 17 web pages, or eight minutes of video, according to a global study on internet connectivity published by Internet.org in February.

The problem isn’t going away any time soon. Unlike the rich world, many emerging markets don’t have an infrastructure of wifi networks. If emerging market users behaved like their counterparts in wealthy markets, their mobile data consumption would also be as much as 2 GB, but would cost them considerably more given the lack of free wifi.

The solution, according to the report, is not rolling out more high-bandwidth mobile networks. That’s unlikely to work out economically. Instead, the authors advocate for quasi-public high-speed wifi points where users can periodically go to download data-heavy content, like videos.

YouTube’s smartphone apps in India, the Philippines, and Indonesia already have a feature that allows users to store and play back videos, even if their phones are offline. In Nigeria, a company called Kiora operates “content zones,” essentially a WiFi hotspot, where customers can download data-intensive content like movies.

The “content zone” example is just one way in which the internet of the future will develop quite differently for the next billion users. As the authors note: “The changes that will connect billions of the poorest to the Internet will also reshape it … as the global center of economic activity shifts to the South and to the East, so too will the norms that govern Internet usage.”