“It is important for mining companies and practitioners of lean to make a clear distinction between lean thinking and automation,” said Paul Smith, director of Shinka Management, an Australian consulting firm that helps companies develop lean mining business practices. 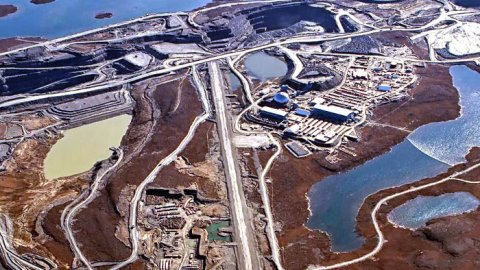 Mining is a volatile business that traditionally operates on boom-or-bust cycles subject to the swings of nature, local politics and share prices. New technology improves production, but industry experts agree it’s not enough. Not just operational practices, but also business models, must be lean to eliminate waste, smooth out the peaks and valleys of production, avoid accidents and adjust to the always-present unforeseen.

“Open pit is easier to automate, but the underground mine is like a mini-city,” said Mike MacFarlane, a 35-year mining industry veteran who, as a consultant, urges companies to think differently. “Every day the road changes; all kinds of complex decisions have to be made along the way. The biggest lever point is engagement with employees.”

Therein lies the opportunity, and it’s not just earth-moving operations that must be managed.

Learning from other industries

Some companies are already working to retool their business models. British-Australian multinational metals and mining giant Rio Tinto Group, for example, launched an industry-first operation at its new Analytics Excellence Centre in Pune, India, to analyze massive volumes of research, productivity and sensor-collected data from the company’s fixed and mobile equipment, aiming to predict and prevent downtime and improve safety and productivity.

“The center will help us pinpoint with incredible accuracy the operating performance of our equipment,” said Greg Lilleyman, Rio Tinto’s chief executive of technology and innovation. Rio Tinto is headed by Sam Walsh, a former auto industry executive and passionate lean business proponent who is focused on mining big data to squeeze greater profits from the business and using computer simulations to predict and plan its future.

Proving the value of lean mining

At the Meadowbank open-pit gold mine in northern Canada, which has recorded 1.2 million ounces of proven and probable reserves since it opened in 2010, Agnico Eagle is demonstrating Walsh’s point. The mine has saved US$1.4 million and increased output by 70,000 troy ounces in recent months, just by managing information more smoothly to achieve efficient dump design.

It’s exactly the kind of outcome Taiichi Ohno, the Japanese industrial engineer and father of lean manufacturing, envisioned in the late 1940s as he observed that communicating information correctly was key to the smooth operation of modern supermarkets in the United States.

Ohno took his ideas back to Toyota and changed the world. Armed with the same concepts and new information tools, the mining industry today has a similar opportunity to transform itself for the future.