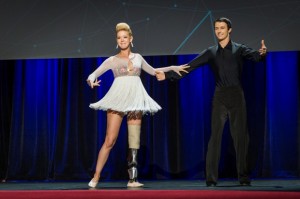 Creating an unforgettable moment crystallizing how technology can change a person’s life, Adrianne Haslet-Davis last week fulfilled her dream of dancing again less than a year after losing part of her leg in the Boston Marathon Bombing. Haslet-Davis’ moment  took place at TED 2014 and was made possible through hard work and the support of Hugh Herr, MIT’s BioMechatronics Lab Director, who outfitted her with a revolutionary prosthetic limb that allowed her re-learn basic dance moves that once came naturally to her. 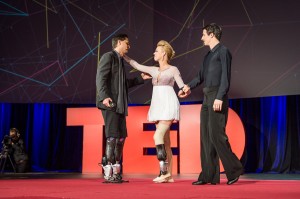 Herr, shown above with Haslet-Davis at TED, is known for his revolutionary work in the emerging field of biomechatronics – creating bionic limbs that emulate the function of natural limbs. Herr was a guest earlier this year at Dassault Systemes’ SOLIDWORKS World event where he told attendees how he designed his own legs after suffering an accident as a child.  Using SOLIDWORKS,  he created the world’s first bionic foot and calf system called the BiOM. 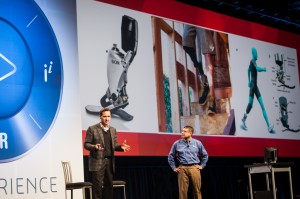 The BiOM Being Designed in SOLIDWORKS

BiOM prosthetic legs mimic the movement of natural limbs by adapting to a person’s walking speed and the terrain of the land to help the prosthetic propel the person naturally. By simply using a battery source and springs for energy, the prosthetic legs augment a person’s ability to run and walk.  They normalize a person’s pace while enhancing stability and controlling for fatigue. 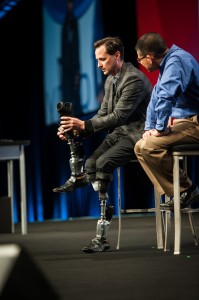 Herr and his group worked with SOLIDWORKS Simulation Premium to create the BiOM prosthetic legs. He uses it in his group at MIT as well – as he feels that the minimal learning curve allows for quick, easy use by new incoming students.

The human body is often referred to as “the world’s most advanced machine,” and by improving medical device design and patient experience with our 3D design and simulation technologies, the potential to understand how that machine works is finally here.  As seen at TED, these advancements are enabling people to achieve what they once only dreamed.

Below is a video of Herr speaking to the audience about his work and about how technology has positively changed his life: