While we led with an Elvis Presley theme yesterday, today, as we launch our second and final day of the event, we look to Sheryl Crow’s theme of “Leaving Las Vegas” as we will soon all be leaving Vegas behind, but not without having shown more than hundreds of attendees our incredible commitment to education – and its strong connection to America’s future.

Bruno Latchague, Managing Director for North America, kicked off day 2 of the Dassault Systèmes’ North American 3DEXPERIENCE Customer Forum to close the Vegas adventure off with a win. He opened the session by asking a (likely) sleepy crowd, “Are you awake?” – and then talked about what everyone in attendance can do to help prepare the next generation of innovators. 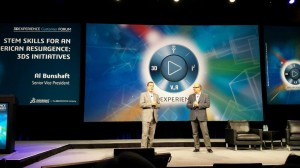 The discussion segued perfectly into a presentation on the company’s dedication to STEM by Al Bunshaft, Dassault Systèmes Senior Vice President. The session, entitled “Skills for an American Resurgence,” perfectly echoed the themes throughout the day from executives and customers alike. Bunshaft challenged the audience to share what they’re doing—“what you are doing is so cool, and most kids don’t even know that”—as a responsibility for building the next generation of innovators. 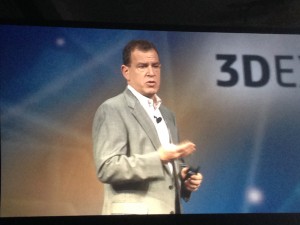 “It’s not about K-12; it’s about K-W, kindergarten through work,” said Bunshaft, adding that many students with STEM degrees don’t actually get STEM jobs. He also discussed 3DS’ efforts to go into underserved schools in Massachusetts to help revitalize their science program, as well as the company’s TADS, in which the company brings teachers into the company for the summer as paid interns. It was tested in Waltham and has since expanded to Providence and Detroit. “Most of them are educators … but they’ve never worked in a company. We need all of our employees, not just our programmers, to be STEM literate.”

Then things “got started, got started in here,” with entertainer will.i.am, whose i.am.angel foundation was represented by Chief of Staff Enrique Legaspi and Vincent Archer, Executive Director. Legaspi talked passionately about his early days as a teacher in Los Angeles, about his group’s amazing work in his neighborhood of Boyle Heights in Los Angeles, and the group’s i.am.college track.  “The future of education is project-based learning – give them a problem to tackle.” 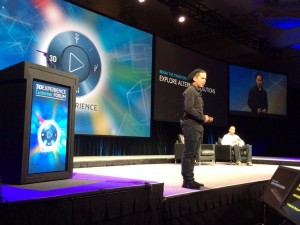 Enrique Legaspi of the i.am.angel foundation

“It does wonders for a kid who’s never met an engineer to ask, what does it take to be an engineer?” added Archer.  “Let’s change Detroit. Let’s change Chicago. Let’s go to Oakland. There’s a lot of places where kids are forgotten—let’s not forget them.”

Legaspi and Archer were a tough act to follow – but Ed Shadle, the owner, driver and project manager of North American Eagle, was up to the task, talking about team member Jessi Combs becoming the fastest woman on four wheels, as well as his group’s STEM efforts to create the next generation of engineers to build devices that will hit speeds beyond our wildest dreams. 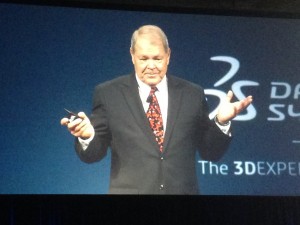 Partner and event sponsor Microsoft had Simon Floyd, its director of Innovation and PLM Solutions, discuss how his company and 3DS are “innovating together” and demonstrated 3DS software on his company’s Surface tablet. 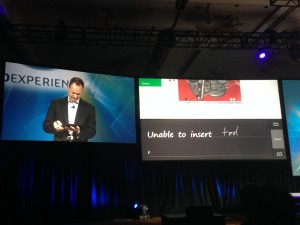 Simon Floyd of Microsoft demos 3DS software on the Surface

To close the plenary, Latchague invited President and CEO Bernard Charlès for an impromptu visit to the stage for a brief, surprise wrap-up and he thanked the participants with a quick, off the cuff farewell. 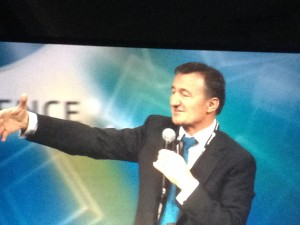 Once again, the afternoon was spent with a series of five industry-focused breakouts featuring numerous customers discussing the business value of the 3DEXPERIENCE Platform to their companies.

For everyone who is “Leaving Las Vegas,” thanks for coming! We hope to see you again next year. Safe travels!

To follow the event on Twitter, search for hashtag #3DXforum and our dedicated 3DXforum live dashboard, which provide an excellent compendium of the event from those who attended.