Imagine a trans-Atlantic flight in the future: you’re sitting on seats whose fabrics resist dirt, the way lotus flowers remain clean and dry in a wet and dirty environment. The plane’s exterior is covered with tiny ridges, like sharkskin, which reduce drag. The plane is part of a scheduled V-formation, which saves fuel.

Icarus donned man-made wings in Greek mythology. Leonardo DaVinci drew flying machines. “In the 21st century, we’re not just trying to emulate bird-flight, but trying to understand how birds are so successful,” says Norman Wood, an expert on aerodynamics and flow control at Airbus.

Imitating nature has a name: biomimicry. It has three aspects, Dr. Wood explains.

First is nature as a mentor. We observe how living things succeed and understand what they’re doing. “It’s the art of the possible,” Dr. Wood says. “If we want aerospace vehicles to improve, we can say, ‘Insects can do it—so why can’t we?’”

Second is nature as a model. “We can ask, ‘How do insects fly—and can we transfer their approach into aerospace vehicles?” he says.

Third is nature as a measure. Simple calculations show that bees shouldn’t be able to fly and yet they are extremely successful. “Using the techniques bees use to achieve flight, we can measure how successful we could be ultimately—and how much further we could take a technology if we were to be as efficient as nature,” Dr. Wood says.

Nature by definition is successful,” he says. “So it’s an extremely good benchmark. We’re now moving into a deeper investigation, known as biomimicry, understanding the details of what nature can achieve and using that to fuel our innovation.”

Take sharkskin, which is covered with rough, dermal denticles (hard, tooth-like scales) that decrease drag. Transferring that technology on to aircraft would cut fuel-consumption and thus reduce emissions. 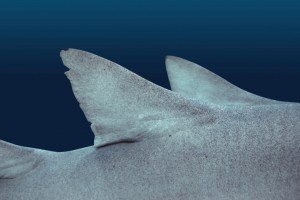 Airbus has developed an aerospace surface with “riblets” that resemble shark skin.

Small patches of sharkskin-like material are currently undergoing tests on Airbus aircraft in commercial service in Europe, to see how it stands up to rain, hail, cleaning, ground contamination and other challenges.

Birds are an obvious model for aerospace biomimicry. Hawks survive thanks to their ability to execute extreme maneuvers in woodlands, or over cliffs, in order to catch their prey. They do it by maneuvering at or very near to their “maximum lift” condition. For aircraft, maximum lift is the point at which they can no longer stay in straight and level flight and stall, experiencing a sudden decline in lift.

Pilots, aircraft owners and makers are legally required to maintain a safety margin from that condition occurring.

Many birds fly near maximum lift by using feathers on the top of their wings to detect when the airflow over the wings reaches that condition. The bird has evolved a nervous system that enables it to quickly modify its wing shape to manage the flow near maximum lift to maintain safe flight and maximum performance.

Airbus is looking at how to use surfaces on the wing to replicate the control demonstrated by birds.

Can we react quickly enough to define how we can make small changes to the wing and not go beyond a safe condition?” says Dr. Wood. “Our aspiration would be that we create an aircraft in the future that has its own nervous system. A bird doesn’t think, ‘oh, I’m at maximum lift and I have to do this.’ It makes the change automatically.”

The result could allow lower approach and takeoff speeds, as well as lighter wings, saving weight and therefore fuel.

Not all biomimicry involves new technology. Migrating birds fly in V-shaped formations partly because birds behind the leader can save a lot of energy, by flying in its wake. 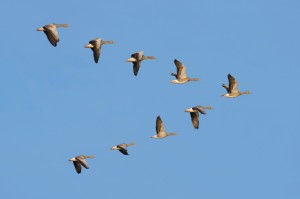 Transferring that to aerospace was assumed to require that aircraft fly close together, presenting traffic control, piloting and safety concerns. However, “as we get more understanding as to how and why birds do it, we find that the flapping of their wings destabilizes the wake behind them. So they have to fly close together to gain benefit.”

Aircraft get thrust from engines, not from flapping their wings, so the wake is not so chaotic. “We have the luxury of having fixed-wing aircraft, a structure that allows the benefit to persist, sometimes for many miles downstream, to trailing aircraft,” he says.

NASA recently demonstrated a 5% to 10% fuel saving by flying aircraft in formation up to a kilometer apart. Such a gap eliminates many of the issues of having commercial aircraft flying close together.

Over 400 commercial flights cross the North Atlantic in each direction every day. If even half were arranged into formations, “the impact on fuel-burn on those routes could be significant,” Dr. Wood says. “With no change to aircraft, we can achieve fuel savings. It’s one example where we can potentially exceed the benefits produced by nature.”