2009 marks the Centennial of the first flight across the Channel by French pioneer Louis Blériot, with his now famous Blériot XI.

On July 25, 1909, Louis Blériot made history with his 37 minutes flight from Sagatte to Douvres above the Channel, oil leaking, wood cracking, wind blowing… 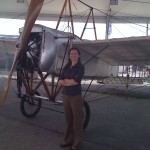 One hundred years after, I found myself visiting “Le Blériot XI” stand at the Paris Air Show Le Bourget. This stand was a collaborative project by Dassault Systèmes, the PLM Competency Center, the alumni association from Ecole Centrale, and Dassault Aviation.

On this stand, there was a Blériot XI. Experts will notice by my photo that it is not the Blériot XI, which made the famous flight across the Channel, but a Blériot XI-2. The difference? The second one is a two-seater, its engine “gnome” is a little more powerful, and it was built for the military. Still, for me, the feeling is the same, next to the Blériot XI-2, I touched history.

One hundred years after, we are writing another page of history with 3D. Because of PLM, it has been possible to make the digital mock-up of the Blériot XI-2, from the 2D plan, measures, and simulation. This digital mock-up will allow the construction of a new Blériot XI-2 in Brazil. It is a fascinating project , on which students from Brazil, India and France collaborated.

From the Le Blériot stand, I also wrote a page of my personal history because of 3DVIA Virtools. On June 17, 2009, I became one of the lucky pioneers to virtually fly above the Channel on board of a Blériot XI-2 digitalized.

That is what 100 years of difference makes! 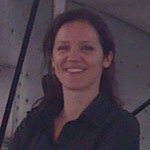