The Great Pyramid of Giza is not only in Egypt.  It’s in the classroom, our dreams, picture frames, and even the Parisian metro.   But do we really know it?

Today thanks to an architect and 3D scientific simulation software, I feel like I know Cheops better.

Building on his internal ramp for construction theory, Jean-Pierre Houdin thinks he has cleared an intuitive itch that something was missing. And his friends Mehdi Tayoubi and Richard Brietner from Dassault Systèmes have helped him do it.

Most people believe the King’s Chamber was closed from the inside.  But then that would have left a dozen workmen corpses with the deceased.  No skeletons other than the king’s were found in the chamber.  Jean-Pierre believes the room was closed from the outside, through a passageway that has never been physically located or explored.  A passageway that leads to the two funeral antechambers.

It’s true that when I was in 5th grade and made a foam bisection of Cheops, the result looked something like this: 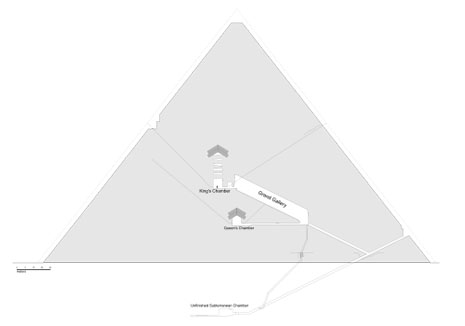 Jean-Pierre had the genius idea to study how Khufu’s father designed and built his burial place, the Red Pyramid.  The day his father died, Khufu needed to start planning for his own pyramid.  So it’s logical to think Khufu hired the same architects who’d acquired solid expertise by building his father’s.  And the Red Pyramid contained evidence of something not thought to be associated with Khufu’s: two funeral antechambers and their corridors.

The funeral corridors and antechambers were necessary to carry in and stock furniture and ritualistic objects employed during the ceremony.  Impossible to predict when the king would die, they needed to have everything in place before death.

How did Jean-Pierre verify his theory?

Only physical proof would provide conclusive evidence, but I was persuaded by the software simulation.

By taking the same antechamber architectural elements and dimensions from the Red Pyramid and including them in the Cheops 3D model, Jean-Pierre, Richard and Mehdi found answers to questions.  For example, the peculiar twists and directions of the already-explored corridors are justified because they are avoiding the antechamber components. You can see these in the French language news video here (great 3D footage).

While I learned many other interesting things today, this tops my list.

Were the Egyptians so focused on the afterlife that they forgot to pass down the knowledge of how real-life royal funerals were performed?  You know, the “boring” logistical details.

Do the Cheops antechambers still contain the furniture and objects used to perform Khufu’s funeral?

P.S.   This morning’s conference presented a lot to digest, and all kinds of fun anecdotes and information to share.  Stay tuned . . .