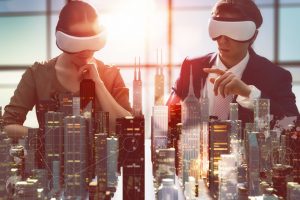 As we construct future buildings, we will start to see more mingling between architecture and virtual reality.

Imagine you’re a hotelier. Your newest property—let’s call it a high-end resort in the south of France—has gone into construction, but is not yet fully designed. Your firm is based in New York. The old way of designing the property would have involved several transatlantic flights and PDFs sent between you, the architecture firm, your marketing team, and any other stakeholders. Choosing the layout of the hotel rooms, making furniture selections, even just picking out materials and a color scheme, “can be a long and expensive process,” says Benoît Pagotto, a co-founder of IVR Nation.

IVR Nation is one of a few companies championing a new approach to making these kinds of architectural decisions. In the new way, clients need not fly back and forth. They simply strap on a virtual reality headset and “step into” a digital version of their new property. Once the client is there—virtually, at least—she has a spatial understanding of how a furniture layout feels, or how a floorboard material meshes with the textiles chosen for bedding. Without leaving the VR experience, the client can make changes and collaborate with her partners in real time. What once took weeks can now happen in an afternoon. “It’s a real game changer for what the architecture industry has been doing,” Pagotto says.

VR is a place
Architects have come a long way from drafting plans on big sheets of royal blue paper with dotted white lines. The analog blueprint is, by now, practically a cartoon of an architectural rendering—but for years, they’ve still lacked the tools to bring their work into the third dimension. Most architects today will use CAD software to create computer-rendered mockups of a physical space. Some will even augment them by 3D scanning a property and feeding that data into the rendering. One particularly advanced design method is called building information modeling; with BIM, architects use meta-data about projects to create interactive, digital prototypes of buildings. This allows for a new degree of precision and efficiency during the design process. But even in sophisticated BIM and CAD programs, architects and clients can only see abstracted versions of a project.

This makes architecture a particularly fitting application for VR. Technologists, filmmakers, and designers are still making sense of exactly how VR will fit into mainstream culture, but in its simplest form, VR is a place. So, too, is architecture. Pagotto and his IVR Nation co-founder, Olivier Demangel, recognized this a couple years ago and launched their studio in January 2015. Pagotto comes from the world of luxury retail design; Demangel is a veteran of the video game world. The combination is important: IVR Nation provides a service-for-hire for developers and designers, and the experience needs to simulate materials, finishes, and colors to work. To do that, IVR Nation treats 3D models a bit like video game design. Pagotto and Demangel take information from clients—either an existing 3D model or one they create from scratch based on the architect’s plan—and build the experience in Unreal Engine, a game design platform Pagotto says they chose “because it’s the most advanced in terms of photorealism.”

Hardware for our architects of the future
IVR Nation uses the Vive headset to show clients spatial renderings. Pagotto says they chose the Vive over, say, the Oculus Rift, because the Vive can track your body’s position (so if you lie down in the real world, you’ll also lie down in the virtual world) and since it comes with dedicated controllers that help users control their experience, it cuts down on common VR side effects like motion sickness.

TruVision VR, another company working at the intersection of VR and architecture, also uses the Vive. It also offers clients experiences via the Samsung Gear VR or the Oculus Rift. This is partly because TruVision has a wider sliding scale for its projects. Some clients come in at the very initial stage of design, while others come in to make some final nips and tucks, says Connor Handley-Collins, a co-founder and sales and marketing director of TruVision. Like Pagotto, Handley-Collins says these new models allow for clients to make design decisions more efficiently than in the past. That cuts down on mistakes, and therefore, costs. “For us, the biggest part of the design process is the ability to change the objects and colors in real time,” Handley-Collins says. “Before we may have looked at colors in 2D, and then you do them one way, and they’re stuck.” These efficiencies are particularly desirable for large-scale projects that will use one template to design many rooms, like micro-living units, hospitals, schools, and hotels.

Looking ahead, the ability to make these changes ahead of time will become even more powerful when they’re part of a larger, virtual decision-making process. This could include, for instance, construction worker training ahead of putting stakes in the ground. Dassault Systèmes’s Optimized Construction lets designers and builders create virtual animated scenarios that act out how to use equipment, or how to handle a given terrain. Once these become available, they’ll become part of a string of VR experiences that help buildings go up more efficiently.

Right now, the design-oriented VR experiences come as services created by third-party studios like IVR Nation and Tru Vision. But Pagotto says soon, it will be a standard offering. “In the coming years architecture firms will integrate this in-house,” he says. “You can put your headset on and look directly at what you modeled.” That may be happening already: global architecture firm Gensler just launched its Gensler VR app, which combines with the Microsoft HoloLens to start showing clients work created in-house. Gensler will use the new technology to do things like adjust office layouts to encourage collaboration, move indoor infrastructure to make spaces more pleasant, and reconsider the sightlines in arenas to give sports fans the best view possible. For smaller firms like IVR Nation and Tru Vision, that could signal opportunity for consulting, or acquisition. Either way, soon, Pagotto predicts, “The whole architecture world is going to be working in real time.”