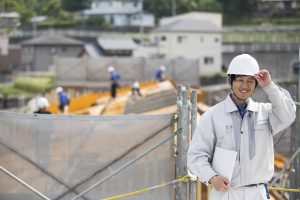 The “i-Construction” initiative was unveiled last December by Keiichi Ishii, Japan’s minister of land, infrastructure, transport and tourism. Its goal is a 50% increase in construction workers’ productivity. Japan’s labor force is projected to decline to 56.8 million in 2030 due to a shrinking population, down 14% from 2010, and automation is seen as a strong solution.

The program mostly involves developing standards for integrating information and communications technology (ICT) with the construction industry. The new technology is being developed by the private sector. 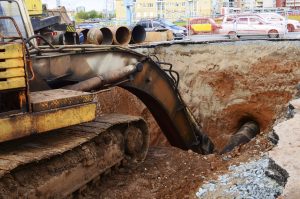 “Bulldozers move earth to get the foundation ready,” explains Christian Sanz, founder and chief executive of Skycatch Inc., a San Francisco company that uses its own specialized drones to create extremely accurate land surveys, which is working with Komatsu. “To do that, you need a really skilled pilot to cut the earth.”

With real-time, digitized 3D data about the volume and shape of the dirt, the bulldozers can be highly automated.

What is removed from the equation is how experienced the pilot has to be,” Mr. Sanz says.

Completely robotic trucks and equipment already are at work in Australian mines, but for safety reasons, the Komatsu bulldozers continue to have a person in the cabin. Automation allows less-experienced pilots to execute complex maneuvers and experienced pilots to do them even faster, vastly improving productivity.

Skycatch drones work in two ways. First, drones gather data to generate surveys of the site. A traditional survey done by humans takes about two weeks to complete on a typical construction site. Skycatch can do the same work in four to six hours, and the resulting data can be communicated to automate bulldozers.

In addition, objects, such as trees or construction equipment, on the job site have to be removed before human surveys—a labor-intensive process that can take another week. Software can remove such objects for digitized surveys.

The survey process usually is done twice, once before work starts and then a refresh after the machines have started cutting the earth. That means the drones can speed up work by over a month.

Skycatch’s drones and technology can deliver surveys that are accurate to between one and three centimeters. “You need accuracy within centimeters in order to automate,” Mr. Sanz says. “Our margin of error is almost zero. Human surveys are extremely accurate and reliable, but they take two weeks on average.” 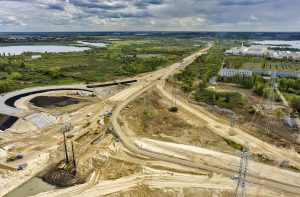 Surveyors can map a few hundred points per day, whereas Skycatch drones can survey a few million points in about 15 minutes.

While Skycatch makes its own surveying drones, it also can use its software to enable other drones that have the ability to collect imagery with GPS and create survey images, but at accuracies of 10 centimeters to 15 centimeters.

Komatsu compares the digital surveys with engineers’ completion drawings, which also have been converted to 3D, in order to calculate the precise area and volume of earth to be moved. Then, the data is used to run simulations of each stage of work.

The future of drones in construction isn’t in building, but in gathering data to give machines eyes, Mr. Sanz says. “Drones will never pick up something as heavy as a boulder and move it somewhere,” he says. “The visibility and accuracy of automated machines moving things is what drones will be able to create.”

The construction industry tends to be conservative, he says. “People are married to the old way of doing things. But having i-Construction become the standard in Japan is going to force every company to move in that direction.”

Japan’s i-Construction initiative is a good model for other countries, he says, by differentiating regulation of drones for commercial use—such as construction—from consumer use. The regulations will set requirements for accuracy, cameras on drones, equipment validation and quality of data to ensure quality and safety.

As for the future of drones in construction, the sky’s the limit. “Komatsu has a vision for 10 to 20 years that will blow people’s minds,” Mr. Sanz says.