From March 14 to 16, 2014, Dassault Systèmes participated in the international showjumping event ‘Saut Hermès‘ held in Paris and broadcast worldwide on Eurosport TV channels. There, we provided a first of a kind 3DEXPERIENCE for TV viewers to get more insights about the art of showjumping. Watch this video to see it in action:

I wanted to learn more about the backstage of this project so I went for a chat with Muriel Descamps, Experiential Lab Specialist at Dassault Systèmes.

Q: The movement of the horse and jumper look pretty natural, how did you capture those movements? With motion capture?

Muriel: No, we used videos of a professional jumper (Pénélope Leprevost) and her horse in order to come up with the 3D models. From there, we ended up with more than 100 animation sequences for the horse and the jumper (trot, gallop, various jumps, etc). When we showed the final result to Ms. Leprevost, she not only recognized her avatar, but also the horse she was riding! It was a great recognition of our work.

Q: What happened next once you had the 3D models of the horse and jumper?

Muriel: So we had the realistic models, but they still needed to be fine tuned with an equestrian expert. We worked with showjuping champion Michel Robert for that matter. In particular, he helped us refine stride animations, by tuning stride distance and speed parameters in our app. His help was immensely valuable to come up with animation sequences as close to the reality as possible.

Q: So I guess you were all set to run the show by then?

Q: That sounds cool! Tell me what’s next?

Muriel: Something that we’d like to integrate is actual data coming from sensors and cameras, and revert this data back into the virtual world. This could be very useful for the jumpers, the trainers, course designers and TV viewers to better understand, compare and explain the jumpers performances. Here, we chose to focus an equestrian sport, but we could imagine repurposing the same app for other sports such as golf, ski, tennis, Formula 1… we just have to dream it!  🙂 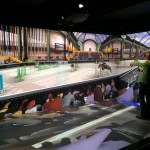 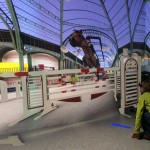 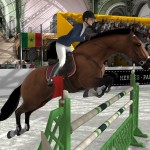 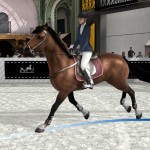 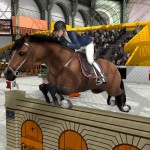 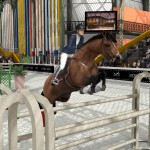 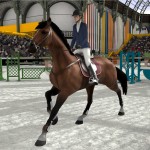 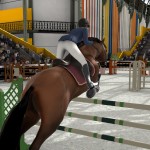 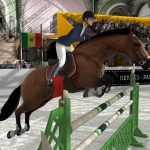