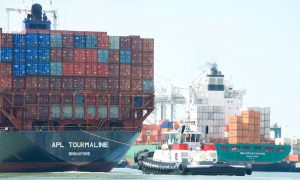 With container-port traffic having more than tripled since 2000, and today’s world container trade expected to double by 2024, ports have become important industrial centers, as well as flashpoints for environmental concerns. Regulations and technology are combining to help ports be greener.

When a port invests in green technology, it is not only good for the environment but also good for themselves, because it can make unit operating costs go down in the long run,” says Vinh Thai, senior lecturer at the School of Business IT and Logistics at Royal Melbourne Institute of Technology in Australia.

As the link between land and sea, ports affect not just terrestrial and marine habitats, but also such environmental aspects as air quality and noise, especially for the often-large cities next to them.

“During the loading and unloading of petroleum products, a release can occur with consequent damage to the ecosystem,” says Rosa Mari Darbra, associate professor of chemical and industrial engineering at Polytechnic University of Catalonia in Barcelona. “The noise of the port, which works 24 hours every day, may generate disturbance and even anxiety to the surrounding population. The storage of solid bulk, such as coal, can generate particles. If they are not properly protected, they may affect the respiratory systems of citizens, especially children and old people.”

The International Maritime Organization adopted the International Convention for the Prevention of Pollution from Ships, or Marpol, in 1973. It aims to prevent, among other things, fuel spills with design measures such as double hulls, and prohibits dumping sewage near land. It also requires ports to be able to accept waste from ships and either recycle or treat it appropriately on land, either at the port itself or elsewhere.

In order to facilitate ships’ delivery of waste at port, Spain in 2010 established a flat rate for waste-handling, Dr. Darbra says. Even if this measure has increased work for ports, the aim is to encourage ships to be greener. 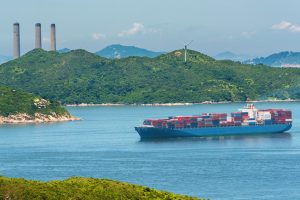 Air pollution has been tamed around ports in the North Sea, Baltic Sea and North America by requiring ships to switch to low-sulfur fuel when entering designated coastal areas. Some ports, such as Rotterdam, offer discounted fees to ships that can show low emissions, Dr. Thai says.

Similarly, Hong Kong and Singapore reduce port fees for vessels that switch to cleaner fuel while at berth. Nine of the world’s top 10 busiest ports are in Asia, and the ports with the highest emission levels from shipping also are in Asia: Singapore, Hong Kong, Tianjin, China, and Port Klang, Malaysia.

Ports also are cutting emissions by encouraging ships to shut down their engines while at berth and switch to onshore power systems. These power generators usually burn fuel that’s cleaner than the bunker fuel used by ships. However, the challenges are providing enough power and connectivity. “Sometimes the electrical plugs and sockets aren’t the same between countries—the voltage isn’t the same,” Dr. Thai says.

Similarly, ports can switch to cargo-handling equipment such as cranes that run on electricity instead of diesel, he adds. Even warehouses can be greener if designed to use natural light instead of electricity whenever possible.

Greater efficiency does reduce harmful emissions. “In high-traffic ports, the congestion from vessels idling for long periods of time significantly increases pollution levels. This is responsible for excessive pollution, producing greater greenhouse-gas effects when productivity does not increase equally with efficiency. It’s a vicious circle,” says Jaime Ortiz, vice provost for global strategies and studies at the University of Houston. “Economically it’s not good either, as pollution shortens the lifespans of the vessels, the cargo on board and the people working on the ships.” 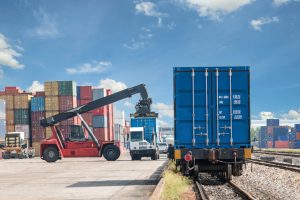 The design of land transportation also affects ports’ sustainability. The use of trucks to transport the cargo from the port to the hinterland involves highway congestion and pollution, Dr. Darbra says. If a maximum amount of cargo were shifted to rail, it would bring important reductions in pollution. Two other competitive solutions are short sea shipping and inland waterways.

“These three measures could improve the environmental sustainability of seaports a lot,” Dr. Darbra says. “They could help decongest traffic at seaports.”

Inland vessels have less capacity than ocean-going ships, but can carry far more cargo than trucks. Goods could travel with less pollution by inland waterways to logistical centers closer to their destination, before being shifted to trucks for just the last, short leg. Inland waterways “give more power to the logistic chain,” Dr. Darbra says.