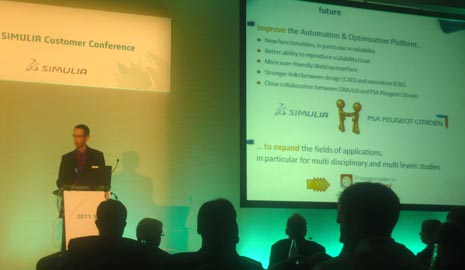 When  J. (Siva) Sivakumar, the Engineering Group Manager for General Motors Powertrain, opened the  23rd annual international SIMULIA Customer Conference on Tuesday, he showed a slide with the names of dozens of engineering simulation software products that  his team uses. Siva joked that Abaqus was at the top of the list because the list was in alphabetical order, but he then stated it was also true that Abaqus is the most used simulation software used by his group!

I could tell that many of the 400 engineers in the session had heard this statement before as they laughed and murmured in acknowledgement of this long-held belief.  He then presented a slide on how GM has turned this adage around, and now Computer Aided Engineering is driving the development process, while physical testing is now mainly used as final validation tool. 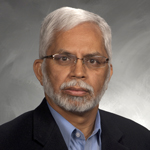 He gave many highly-visual examples on their use of Abaqus and other simulation tools being used to achieve designs with the right ‘first-time’ performance.  In addition to improvement in quality through upfront use of CAE, GM has also achieved significant time and cost reduction by reducing pre-production hardware builds, engineering test vehicles, and warranty costs.

Siva made it clear that, while the CAE vendors have made vast improvements in their simulation software over the years, that is ultimately the users, like those in the audience, that are at the heart of making the realistic simulation an invaluable tool for driving product development.

The last presentation of the day was a general lecture on SIMULIA SLM, which included a guest presentation by Benoît Guillaume, numerical Operations Specialist, PSA Peugeot Citroën.   For the past 3 years, Benoît and his team have worked to deploy their Automation and Optimization Platform which aims at improving operational efficiency and capitalizing on best practices.

The hard work of our conference team is paying off at the conference, as the smiling faces and loud conversations of the more than 400 engineers at the conference are clear signs that the event is a real highlight of everyone’s year as they are able to reconnect with long-time acquaintances, make new friends and share their ideas for driving improvements in realistic simulation technology and methods.

The Sangria and tapas served at the Partner Reception hosted by 21 exhibiting partners was a relaxing way to top off a great day at the 2011 SIMULIA Customer Conference!

Stay tuned for more from the conference!

P.S.: I really think the Sangria, tapas, and sites are definitely worth a future visit to Barcelona! 😉

Latest posts by Karen (see all)