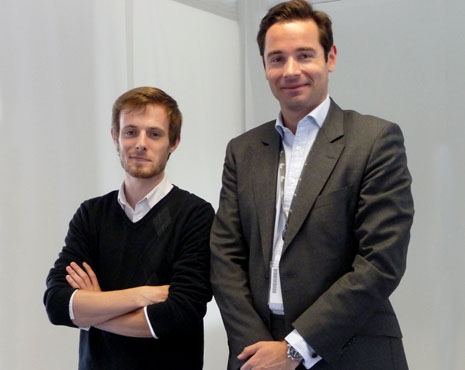 I met Romain Lavault, Vice President, Strategic Development at DELMIA (formerly at Intercim) and thought you’d enjoy some insights from the man behind the merger between Intercim and 3DS! So without further delay, let’s see what he has to say!

1/ What are the three nicest surprises you encountered now that you’re part of Dassault Systèmes?

One of the best things I found is definitely the customer-centric culture of Dassault Systèmes. Before you join the company, you might think that since it has such a big R&D legacy, it’s not very much customer-oriented. But this preconception falls quickly when you’re inside the company, and that was a nice surprise for an ex-VP of Sales!

I was also positively surprised with the company footprint: it goes much beyond its traditional core markets like aerospace or automotive. I’m personally crazy about life sciences which have very different needs than the “heavy” industries like aerospace for example… so it’s nice to see we’re on the same path.

Now, clearly, my nicest surprise is about the people at 3DS. People may know the company but usually not the men and women behind it. That was the same for us: we had no idea that employees would be so passionate about innovation. Coming from a start-up environment, it was a pleasure to see that Dassault Systèmes is still in that mindset, reinventing itself constantly.

2/ During your presentation you talked about a creative loop you used, called “plan/do/learn”… Can you elaborate on it?

This loop describes exactly where Intercim complements the existing DELMIA offer. We are connecting communities which have a desperate need to collaborate but did not really have a real-time way to do it.

DELMIA is about planning your operations before you execute. But we know things don’t always go exactly as planned. So we needed a way to manage these discrepancies and close the loop from the real world to the simulated world, and yet still allow workers to execute the work as required by engineers.

So we thought that if things don’t go as planned, it’s for a reason: that’s an opportunity to learn, especially if it’s a recurrent problem.

Take those experienced workers on the shop floor (yes the ones with a big mustache). They captured all these lessons and that’s what we want to capture scientifically and bring back in the PLM backbone.

People in production hold an important share of the IP of the company and their know-how matters to the engineering community. With an aging -and soon retiring- workforce, the challenge to gather best practices and merge knowledge between engineering and production is a key concern for manufacturers worldwide.

3/ I’ve heard that your product, the former Pertinence software, allows you to do just that: find out what are the best-practices and, conversely, what must be avoided on the shop floor. Can you explain how this works?

The former Pertinence software is now DELMIA Operation Intelligence and it works pretty simply actually: instead of looking at the historical data in a mathematical way (finding an equation that drives the whole system), we go for a much logical way, not using a statistical approach.

This is an automated discovery of the common points or patterns among the samples or the production lots: what do the best ones have in common? What do the worst ones have in common? Is it specific to a particular group? And this information is not only numbers, it can be qualitative too. So we are extracting explanations from a set of observations to answer a problem or a phenomenon that seems difficult to predict.

For example, say product X (a medication) works for some people (let’s call them group A) and not for the other (group B). The question is: is there something specific I see in the descriptions of group A that I don’t see on group B? That’s what the software will tell you. “The drug works on these people and here is what they have in common which explains the success (certain genes for example).”

That’s a fact-based reasoning that helps when the theoretical model isn’t enough to fully represent life. So, from observation, you draw rules that say: “when you’re within that pattern, your chance of having this or this problem is that much”.

When you combine this technology with other existing modeling techniques available across all DS brands, you end up with a model that is even more lifelike than with simulation alone!

4/ So what’s the plan for the Intercim team now? What are your objectives?

To grow of course! We were “only” 70 people and after last summer, all our customers and the new ones went out of the economic crisis and all projects re-started at the same time. We needed to find a way to quickly increase our resources and extend our footprint so we had two options.

First one would have been organic growth, by raising money and hiring people. It takes time. Or we could have looked for people and channels ready to go. That was much faster so we chose this one. Dassault Systèmes was an obvious solution for all of us.

Now we’re transferring our expertise to more and more people inside DS to be able to serve more customers in parallel and leverage the existing channels for that new DELMIA domain. The acquisition of Intercim is also the starting point of a new DELMIA with a larger footprint and a much bigger community of users. And that is just the beginning. Stay tuned!

Well, on behalf of the whole team, thank you for welcoming us! We have received a tremendous welcome from everybody here and great feedback from customers so this was definitely the right move for both Intercim and Dassault Systèmes.

So what do you think? I was personally stunned with the whole logical approach to it!

And again, thanks a lot Romain, it was a real pleasure to meet you! 🙂