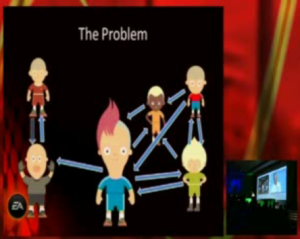 One of the challenges faced by both worlds is to be able to prototype and iterate on ideas pretty fast. This requires to adapt to new techniques and new tools.

Using the same techniques and/or technologies?

You got my point, now please take a look at what my friend Martijn Steinrucken, concept designer at Electronic Arts said a few months ago at the Dassault Systemes Developer Conference (DevCon).

Part 1 is about the history of video games and where we are now. For those who are already familiar with this industry, I suggest to fast forward to the end segment or directly to the second video;

Part 2 is about a key pain chain of the video game industry: how to convince people about your ideas and projects.

So, does this ring a bell? If you get rid of the fancy looks of the characters involved in the presentation, I guess this translates well to PLM issues.

P.S. If you missed the beginning of my Gaming-PLM series, here are my previous posts:

From Building Products to Experiences: Can Gaming Technologies Help? Part 1

Latest posts by Virgile (see all)