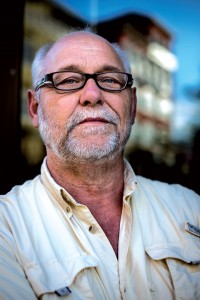 Pat Henderson, the outspoken president of Hardstone Construction, defied industry tradition to apply 3D techniques pioneered in discrete manufacturing to the challenges of a commercial project.

In the process, he proved that cost overruns are not a necessary evil of construction … and that some risks are well worth taking.

Despite 30 years of experience, however, certain aspects of the industry still puzzle him.

For example, why does the industry accept 20% cost overruns as a normal part of doing business? << Click to Tweet

And why do construction companies resist the 3D design technologies proven in countless other industries – technologies that could eliminate the overruns?

Getting answers to those questions is important to Henderson because he wants to leave his employees and his daughter, whom he is grooming to take over the company, a stronger, more profitable, and less frustrating industry than the one he has known.

“I am convinced 3D has the power to eliminate the problems that abound in the construction industry,” the forthright Henderson said. “I believe it will reduce waste in construction by upwards of 10%. When you consider the trillions of dollars spent on construction in the U.S. alone, that is a very significant savings.”

With 2 million square feet of retail, office and parking space, the risks of delays and cost overruns were enormous – especially after the lead architects, structural engineer and mechanical/electrical/plumbing (MEP) engineer abandoned the project.

The owner subsequently asked Hardstone Construction to pick up their duties, in addition to the company’s original construction coordination assignment.

On the Tivoli Village project in Las Vegas, Hardstone managed in-house coordination of all trades and brought the $300 million project in on time with zero dollars in contractor or subcontractor claims.

The daunting challenge was also an opportunity.

If Hardstone Construction could use the same advanced 3D technology that has transformed the discrete manufacturing industries to salvage the Tivoli Village project, Henderson knew he could prove his point beyond a doubt.

A CALCULATED GAMBLE PAYS OFF

Henderson believed that creating a highly accurate 3D model of a virtual Tivoli Village would allow his team to recognize and eliminate risks with low-cost bits and bytes rather than high-cost physical materials. By improving coordination, Henderson also bet that 3D modeling would make the workplace smarter, safer and more efficient by enabling all stakeholders to collaborate more effectively.

By the time the first phase of Tivoli Village opened in 2011, Henderson had his proof.

Hardstone managed in-house coordination of all trades and brought the $300 million project in on time with zero dollars in contractor or subcontractor claims. Henderson estimates savings totaled between $500,000 and $1 million in potential framing cost overruns alone, and between $2 million and $3 million overall. 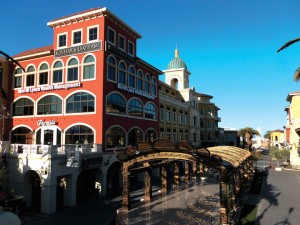 Because construction industry experience with the advanced 3D application he chose is limited, Henderson relied on a diverse trio of 3D modeling experts on the Tivoli Village project:

One key advantage on the project was that repetitive 3D geometry did not need to be modeled manually.

Instead, variations on individual components were generated by entering parameters – drawn from spreadsheets and design tables supplied by the architect – into basic component templates.

“It was a truly unique advantage,” Cantin said. “These tasks would have been time-consuming and subject to high risk of human error if they were modeled manually. In fact, without the automation process, most builders would not model them in the first place, which could lead to mistakes, rework and cost overruns.”

Neme estimates that repeated iterations between initial design and final shop drawing production allowed Hardstone to optimize the MEP routing to reduce materials by 30%. “That is good for the budget, but also for the environment,” Neme said. “Because we order everything to fit based on the model, there is no waste.”

On a framing budget of $5 million, change orders might easily add 20% or more – an additional $1 million. At Tivoli Village, the cost for change orders was zero. “We were obsessed with finding ways to apply manufacturing processes to construction,” Cantin said.

Because construction workers on the Tivoli project could see the models in 3D, they easily understood exactly how different systems came together, the order in which they needed to be installed, and the importance of doing their work in ways that left room for the next trade’s installations.

“There was practically no time wasted on resolving conflicts between different trades on-site during construction,” L’Heureux said. “We simply didn’t have conflicts.”

With Phase 1 of the $300 million project complete, Henderson is so convinced that the application has the potential to transform the construction industry that he has arranged for his daughter to learn the program.

“She is going to be in this business long after I am,” Henderson said. “I want her to have the best solutions at her fingertips. I am convinced it should be the future of this industry.” 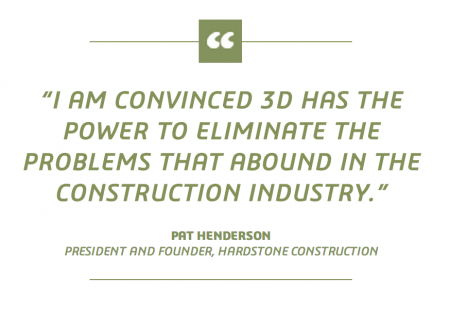 By Greg Rice. This article originally appeared on Compass, the 3DEXPERIENCE Magazine.