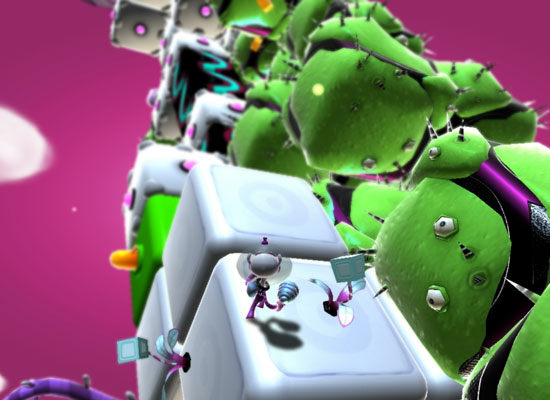 If Social and online networks continue to invest in online gaming (e.g., Google invests $100+ million in Zynga), they will soon challenge consoles for market share and revenue. Currently, console games bring in more than six times the amount of revenue as their casual, online counterparts ($19.66 billion compared to $3 billion). For networks like Facebook to capture console revenue, game graphics must mature from simple 2D, Flash-based, to full 3D. If this happens, the question becomes will Facebook be the next game console?

For years now, 3DVIA has been providing the technology to bring 3D games online all over the Web, including sites like Facebook, Nick Jr., Neopets and more. This week was no exception: 3DVIA launched its first game built on the new 3DVIA Studio engine to Facebook. “Billions, Save Them All” is a full 3D action/puzzle game where players compete for high scores with friends and other Facebook users. The game is made unique by the combination of dreamlike art and innovative gameplay where players construct 3D cube bridges and walk on all sides. It’s a 3D game that stands out in the predominantly 2D Facebook Platform world.

In addition to launching its first 3DVIA Studio game to Facebook, 3DVIA announced the ability to publish 3DVIA.com-hosted games and apps directly to Facebook with just one click (including custom 3DVIA Scenes). This is a great way for 3DVIA users to distribute games and apps to a large audience without having heavy programming knowledge.  See the tutorial here.

This makes one think, could this be the trend? Will 3D social games (i.e. World of Warcraft types) eventually move to the Facebook Platform? It seems to make a lot of sense. Over 500 million people (including myself) use Facebook to stay in touch with friends, keep up-to-date on news and to play games. Why not use Facebook to play more advanced 3D games? Or, why not use game technology to extend Facebooks’s functionality to non-gaming applications…

As we all know, gaming technology can be applied to non-gaming uses. This opens limitless possibilities for Facebook: why settle for a 2D photo and profile of your friend when you could join them in a 3D room to chat in real time, 3D shop to buy virtual goods and so forth.

With such endless possibilities, it’s hard to predict the evolution social networks like Facebook will make. But, as you ponder this, you should play Billions, and check out the quality of the 3D in a web-based game…be careful, it’s addictive.  And, just in case your Boss catches you playing at work, you can tell them that you are “doing research on the future of 3D social gaming”.

We would like to know what your  thoughts are and your predictions for the future of 3D social gaming.