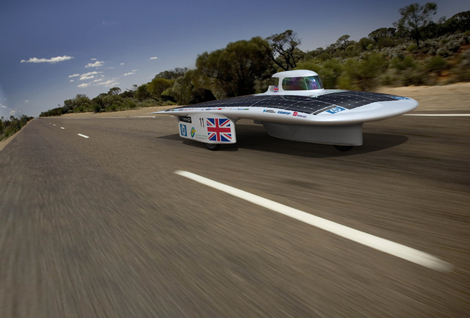 I’ve been fortunate enough to follow the Cambridge University Eco Racing team over the past year (you can follow them too: http://twitter.com/cuerendeavour) and see the car being designed from scratch. Last Weekend they launched their solar race car, named Endeavour, at the legendary Goodwood Festival of Speed in Chichester, England. Adding excitement to the launch was the appearance of Jenson Button, Formula 1 championship leader and the star driver of Brawn GP’s racing team. Jenson helped launch the racer by autographing the vehicle in front of the world’s press and media. Check team photos and the video of Jenson signing the car here.

There’s some very impressive technology in this racing car. It may be a world away from an F1 car in terms of power, but to get a car to drive at 60mph using 2 horsepower takes cutting-edge engineering. 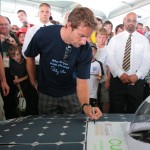 The main attraction of the Festival of Speed is the hill climb competition. The tricky course should be a breeze for the CUER team compared to the upcoming challenge their solar race car was made for – the 2009 World Solar Challenge. This daunting challenge will require the team’s car to race across the Australian outback from Darwin in the Northern Territory to Adelaide in South Australia. The 3000km race will take the teams competing a whole week to complete the journey, travelling the length of the infamous Stuart Highway.

The Cambridge team used SolidWorks for the overall car design. The car is a three wheeled tricycle configuration to reduce mass and simplify drive-train. The aluminium space-frame on top of which the carbon fibre composite shell sits has been designed to be as light weight as possible; weight is one , if not the main, consideration in the design of the car. With weight being such a crucial factor, Abaqus FEA was used to trim down the size of the Aluminium space frame chassis, and then virtually test the structural integrity of the frame. Earlier this year the team issued a joint press release with Dassault Systèmes that provides more information.

As the team races to the starting line in Australia later this year, they can rest assured knowing that with the help of Dassault Systèmes technology the car was designed to be as light, efficient, and nimble as possible!

P.S. I wish I could be in Australia to watch the race!

Latest posts by Tom (see all)