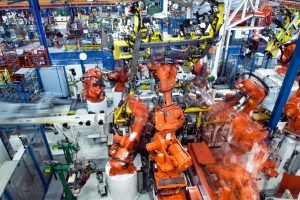 As usual, the Internet is busy disrupting industries: this time, it’s manufacturing. Since the industrial age began around 1760, manufacturing has strived for efficiency through standardization. The Internet—especially the Internet of Things—is taking that apart by allowing for greater personalization.

Making unique products doesn’t mean a return to the days of handmade artisanal goods. Instead, it means multipurpose manufacturing systems and flexible production, often executed by automation and robots that assist human workers.

“Machine tools are typically restricted in their functions and the types of material they can handle,” says Karl Hribernik, department manager at the Bremer Institute for Production and Logistics, or BIBA, in Bremen, Germany. “Production in the future will be more flexible. Cyber-physical, multipurpose production systems and manufacturing cells are the next generation of industrial machinery. In the Industry 4.0 paradigm [alluding to Germany’s initiative to integrate the Internet of Things (IoT) in industry to usher in rapid technological change in manufacturing], distributed resources will make use of local capabilities in flexible supply chains.”

Such flexible systems will rely on the IoT as well as on robots.

Robots can be reprogrammed to do different tasks. So engineer-to-order will make extensive use of robots. It can’t be restricted to single-purpose machines,” Mr. Hribernik says. 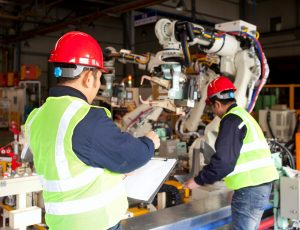 The communication among robots, machines and humans relies on the Internet of Things. Sensors are getting cheaper even as they are able to do more, with more precision.

The Industrial Internet Consortium, an international group setting the architectural framework and direction for the Industrial Internet, including operating two dozen test beds, launched a new test bed last year using the IoT to track everything on the floor of a factory—tools, parts, work in progress, people.

“There are two reasons,” explains Richard Soley, Massachussetts-based executive director of the Industrial Internet Consortium and CEO of Object Management Group, a technology standards consortium. “We can make more efficient use of the factory floor if we know where everything is. People on the floor spend half their time looking for the right tool. So if the system knows where the tool is, it can say, ‘Tool C is behind you, four meters on the left.’ We also know which parts of the factory floor are likely to be free soon, so we can move in the next part to be worked on. It increases human and machine efficiency. It’s reinventing factory-floor management and greatly enhancing factory-floor safety.”

The communication with workers increasingly is taking place via a worker’s personal smart phone, he adds. “It has sensors in it, it communicates on 25 different communication bands and it’s something you carry everywhere. That is going to be the most ubiquitous IoT communicator.”

The dream in the manufacturing space for decades has been to do what was called flexible manufacturing: changing with short or no notice, Dr. Soley adds. Retooling an automotive production line can take several weeks. So, for example, one motorcycle maker doesn’t retool at all, but builds each motorcycle separately.

“They know more about their customers because of the IOT—tracking customers and predicting what they need,” Dr. Soley says. “Because they meter the production line, they know what’s in production now and what they could be producing on the fly. Essentially they make every order differently. It means they can respond more rapidly to customer demand, offer more options and products and stay ahead of competitors.”

As this approach takes hold, he adds,

We’re looking at a future not far away in which everything you build is completely personalized.”

Indeed, an important aspect of the IoT isn’t just in the making of products but in monitoring  their entire life cycle. 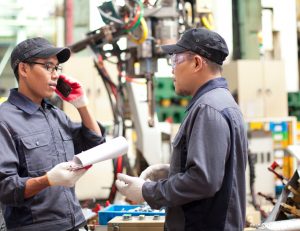 The IoT provides “better information on how products are made and used,” Mr. Hribernik says. “It allows a more granular and precise monitoring of the quality of products being manufactured. If you feed that back into design, it allows engineers and designers to improve design for manufacturing and quality. In the middle of a product’s life, investigating product usage can help detect faults. If companies get that feedback via the Internet of Things, then they can iterate product design and manufacturing more quickly. It also can allow them to provide tailor-made services, like predictive maintenance, during the product’s life. And at the end of life, if you know how a product was used, what parts it was  made of and which parts were replaced, you can better achieve recycling, refurbishing or reuse.”

“It’s a revolution/evolution from mass-producing automated lines to more flexible production based on cyber-physical systems,” Mr. Hribernik says. No matter how refined robots are, they are still far from the flexibility and adaptability of humans. The best practices use robots and automation to augment human workers, by doing things that are too repetitive, strenuous or dangerous for people.

“We see a potential for collaboration with robots to help older workers and keep them in the workplace, maintaining their jobs and also their experience in the company,” he says.

Although awareness and acceptance of IoT and engineer-to-order processes is increasing, “manufacturers are still very, very careful about sharing data out of their production lines with machine-tool providers,” Mr. Hribernik says. “The B2B models need to evolve before widespread acceptance in industry will make an impact on manufacturing.”