Unmanned Aerial Vehicles (UAVs), or drones, are used to hunt for oil, to monitor hurricanes, to film movies and for search and rescue operations. As regulations become clearer on how and where UAVs can be used, and as technology continues to develop, we’ll see even more applications for UAVs in the future.

When UAVs were strictly for military use, the electronics onboard were big and clunky,” says Michael W. Heiges, principal research engineer at the Georgia Tech Research Institute in Atlanta. “The computers didn’t have a lot of capacity.”

Big UAVs have to be controlled by a team of people and can cost over $1 million. However, technological advances in consumer electronics have driven down costs and improved sensors that could also be used on UAVs, making them smaller, cheaper and more nimble. Micro UAVs have wingspans as small as one centimeter, though such tiny drones can fly only a short time and can use only limited sensors. In between lie a range of UAVs that can cost $500 to $2,000.

Now you can maneuver them around very easily, like a hockey puck on ice,” Dr. Heiges says. “It took away a lot of the skill involved to operate.”

Amazon.com Inc., the online retailer based in Seattle, said last December it was developing drones for package delivery. The company’s goal is for packages to arrive within 30 minutes of an order being placed online. However, the U.S. Federal Aviation Administration said such a use of UAVs wouldn’t be allowed, at least for now. 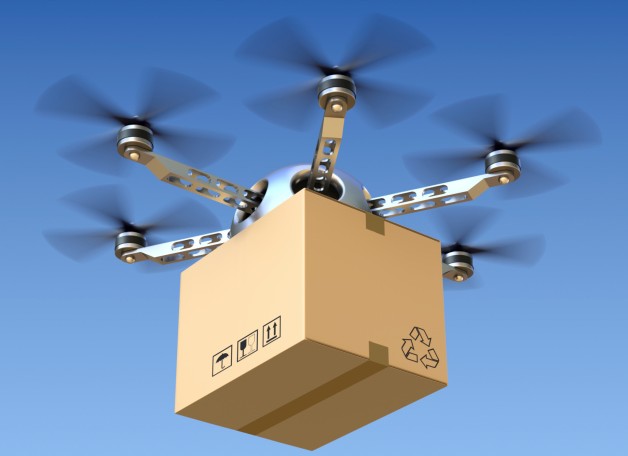 Dr. Heiges and Georgia Tech are working with cable news channel CNN to study how to safely use UAVs for newsgathering.

In the U.S. and some other countries, small UAVs are governed by the same rules as remote-controlled model airplanes, which must fly no more than 400 feet (120 meters) above the ground. They also must be kept away from populated areas and full-size aircraft. There’s also a distinction between hobby use and commercial use. All business use of UAVs is under FAA regulation, and requires a certified aircraft and certified pilot.

Here lies the rub: For now, in the U.S., small UAVs need to stay within sight of their operator on the ground, and bigger UAVs need to be monitored by a chase plane. That limits the ability to send in UAVs where it’s too dangerous or difficult for people to go—for example, near a railroad derailment with a toxic spill or to fly over a damaged nuclear plant to track radiation leaks. In Europe, UAVs are being used for safety inspections of infrastructure, such as rail tracks, dams, dykes and power grids, according to a communication from the European Commission in April. National authorities in Europe also are using them for disaster relief, such as flying over flooded areas or supporting fire fighters.

Larger UAVs are being flown remotely—though over unpopulated areas—for example, in search and rescue operations in national parks, or behind the lines of wildfires, Dr. Heiges says.

Technology could address this challenge soon. “The main thing people would like to see is sense and avoid capability, either radar or video or some combination of the two,” he says. “That capability is needed to avoid other aircraft and for being able to understand how far away other aircraft are. Until we do that, UAVs have to remain in sight of an observer on the ground.”

The current sensing systems “all have shortcomings in one way or another,” he adds. For example, radar-based systems are good for detecting other metal aircraft but not seeing things such as parachutists or balloonists. Cameras on UAVs can transmit images of what’s near a UAV to a person farther away, but the cameras don’t work well in clouds or if they’re facing the sun.

To be reliable enough to pass regulatory muster, sense and avoid systems “will have to be better than a human,” Dr. Heiges says.

Until then, there are many applications for UAVs in unpopulated areas.

One of the first markets that’s really ripe for use of the technology is agriculture,” says N. Dennis Bowman, extension educator, commercial agriculture-crops at the University of Illinois at Urbana-Champaign. “The ability to do surveillance of crops and livestock really fits the technology.”

Farmers in general are cultivating more acres, making it more difficult to get to every patch of land to see whether there’s a need for more irrigation, or whether pests or disease are affecting crops.

We’re looking for breakthroughs in software that can take series of photos and stitch them together to get a big picture, but without having to fly at such a high altitude that the UAV would interfere with airplanes,” he says. “At lower altitudes, you could get better resolution and more detail, but you also want to see a whole field at one time.”

In Japan, farmers use UAVs for crop dusting, which isn’t allowed in the U.S.—though the size of U.S. fields is too big for the carrying capacity of drones today, Mr. Bowman says.

Ranchers, whose sections are 600 acres or more, could use UAVs to locate cattle, to save crews’ time when the animals need to be rounded up for procedures such as vaccinations.