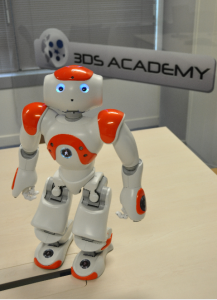 Today, we had the pleasure to welcome a new colleague in our 3DS Academy team … NAO!  😀

NAO is a programmable, 57-cm tall humanoid robot! Created by French company Aldebaran Robotics, NAO was introduced for the first time in 2006 (and we interviewed his maker Bruno Maissonier in 2010). It measures 56 centimeters, weighs 11 pounds and have a capacity of 25 degrees of freedom, allowing reproducing the majority of human movements (walking, holding an object, playing football, dancing…).

Dassault Systèmes, through its partnership with Aldebaran Robotics, innovates by proposing a new software platform (3DEXPERIENCE platform) to develop new experiences with NAO.  It is a new step after NAO Tutorials for SolidWorks. As such, the 3DS academy team has modeled the robot using the 3DEXPERIENCE apps and is now programming its behavior with CATIA Systems. We will certainly keep you informed about every progress the team will make! 🙂 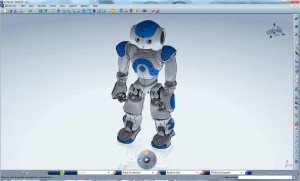 Watch this to find out more about NAO:

Talk to you soon!

Latest posts by Charles (see all)