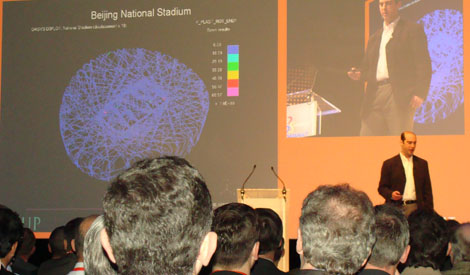 It’s alive! That’s the impression I had at this morning’s opening session. CATIA CEO Jacques Leveille Nizerolle told the crowd of +1,200 that this year CATIA wanted to emphasize the word ‘live’ because that’s where V6 shines. Live collaborative design. He told us he wanted people to “jump in and use V6, touch it.”

The events team also pulled off making the CATIA logo, Beijing National Stadium and the V6 logo seem alive. Through an optical theater technique they hovered and spun around, almost like ghosts in a Harry Potter scene.

One of the presentations I liked best was given by Arup Sport’s Associate Director of Structural Engineering, Martin Simpson. It was interesting to hear how the conception of the Bird’s Nest (designed with CATIA) began five years ago and the roles parametric and associative design played in conceiving, for example, the cascading stairs, twisted box sections, or eliminating the moving roof and quickly re-jigging the entire project.

Because the design was so complex (think twisted steel beams à la rung-out towel, wrapped delicately around the stadium bowl), Martin said it was crucial to be able to digitally assemble all the parts in a virtual prototype, test in detail each component within context, and adjust from there. In fact, the project was so complex that when it came time to building the scaled physical model, they couldn’t find anyone in the construction industry capable. Arup had to call upon a shipbuilder out of Shanghai to build it!

Martin ended his presentation comparing the lifecycle for buildings to that of manufacturing. The difference being that today there’s still an enormous amount of waste in construction whereas manufacturing has become lean. For this, and for where the lifecycle for buildings is really fractured, solutions like CATIA for 3D CAD and PLM can come in and make a big difference.

But back to manufacturing. Martin pointed out that if you look to its history, starting with Henry Ford’s first assembly lines to today’s robotic technologies, you get a glimpse as to how his industry will evolve.

I was able to catch up with Martin in the lobby of the New York hotel to drill down on this. Martin told me that what he really expects to change is how you put together complex buildings like stadiums (which, BTW, will grow so complex as to become community complexes in themselves, including schools for children!). He started talking about assembling large chunks separately and bringing them together. And I of course thought of Boeing’s Dreamliner. We’re also seeing this starting to happen in the shipbuilding industry. I didn’t expect him to say it, but it makes sense when you consider how complex the stadiums being designed today are.

As an aside, I asked Martin if he was familiar with farm towers and if he thought people would start growing food in stadiums too. Martin then kinda looked at me funny and answered: “Now there’s an idea I haven’t thought of before! Maybe not in the stadiums themselves, but on the grounds.” Just think, one day our stadiums may grow the food that onsite restaurants will cook and serve to visitors. I’ll betcha we’ll see it one day . . .

P.S. If you’d like to dig deeper into lean construction, check out Sir John Egan’s “Rethinking Construction.” It was written in 1998 but remains pertinent. Some sample stats Martin covered from the paper: Ten percent of materials used in construction are wasted. Forty percent of construction projects are completed late/over budget.

P.P.S. If you’d like to read more about the future of stadium design, you may enjoy the article Pushing the Limits in Stadium Design.