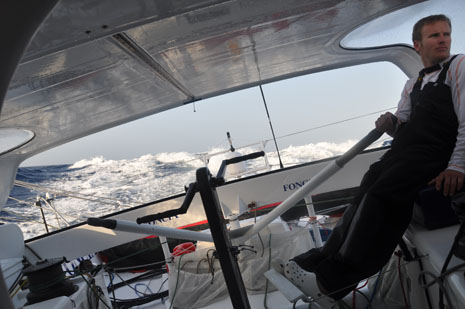 Ten days into the Barcelona World Race (a doubled-handed race around the world which started on December 31st), Michel Desjoyeaux called his technical team in France to inform them of a problem on his boat. He and his sailing mate François Gabart had hit an Unidentified Floating Object (UFO) which ripped the carbon material off the boat’s crash box.

The crash box is a relatively new addition to offshore sailboats. It’s a watertight box filled with high density and extremely resistant PVC.  Normally  in the case of such a frontal collision, the crash box  would protect the boat’s lower stem from damage.  This is important to prevent leaking, and ultimately sinking.

UFOs pose an increasing problem for boats at sea, so the crash box works as a bumper. However Michel Desjoyeaux and François Gabart had to repair their crash box to avoid any further problem that could’ve forced them to abandon when entering the South Seas.

Michel and François were not too far from Brazil when the problem appeared, so they quickly decided to organize a ‘pit stop’ in Recife. Within 48hours, part of the technical team arrived in Recife to prepare all the logistics. They needed to find the best place to lift the boat and repair it. At the same time, a brand new PVC part was manufactured in case they needed to replace entirely the crash box.

Thanks to 3DVIA Composer, the video below was sent by Michel Desjoyeaux and his team to the press so they could understand what exactly was planned to fix the boat. 3DVIA Composer could also have been used between Michel and his team to share and better understand the problem or even to train the Brazilian correspondent on how to repair the crash box. This is a good example of how 3D can be a universal language!

Eighteen hours after their arrival in Recife, Michel and François were back into the race with a “new” boat nose. And within just 5 days, they were leading the race, having gained 9 positions in the ranking!

If you want to learn more on how Dassault Systèmes helped Michel Desjoyeaux, check out the dedicated website at www.3ds.com/desjoyeaux.

Thanks to 3DVIA Virtools, you will also have the opportunity to get on board the 60 foot monohull in real-time 3D and even participate yourself to the Barcelona World Race with Michel Desjoyeaux in a 3D experiential serious game.  We will tell you more about this serious game soon and in the meantime, you can follow Michel Desjoyeaux’s ranking in the real race.

Latest posts by Marc (see all)