The future of design looks a lot like Legos.

Modular design allows a product to be assembled from easily replaceable or interchangeable parts. Most people are familiar with it in architecture and furniture. However, it’s also being applied to other things, from nuclear-power plants to shoes, submarines and guitars.

Modular design is gaining traction thanks to the convergence of several trends. Mass customization is pushing industries—from consumer products and electronics to automobiles—to find ways to deliver customized solutions without sacrificing economies of scale. Tighter environmental regulations are prompting companies to find ways to reduce waste caused by their products. And consumers, fed up with a throwaway society, are looking for products that manage to last yet which can be upgraded as needed.

I was thinking about stuff and why we throw it away,” says Dave Hakkens, who invented Phonebloks, a modular design for a mobile phone. “All our electronics are disposable. If a bike has a flat [tire] you fix it, you don’t throw it away. But if a phone part is broken, you have to throw [the phone] away.”

In wanting to reduce electronic waste, Mr. Hakkens considered several alternatives. “Should I make a phone that could last 100 years?” he asks. “I like technology and the way it evolves and can improve our lives. If I make a phone that lasts 100 years, I won’t be able to upgrade it. But if it has modules that I can upgrade, I can throw away only a little part.”

Unbeknown to Mr. Hakkens, Motorola Mobility had been working on a modular mobile phone as well, called Project Ara. Google, which acquired Motorola in 2011, is expected to unveil its prototype of Project Ara next year. The goal: a phone that can be customized and upgraded at will.

Mr. Hakkens, who came up with the idea of Phonebloks as a graduation project from the Dutch Design Academy in Eindhoven, the Netherlands, has linked up with Project Ara.

It’s hard to make a phone and it’s a tough world—you need patents, lawyers, you have to compete with big companies,” he says. “I don’t want to build a phone myself. I don’t want to start a phone company. I want to push industry to start a new way to make phones.” 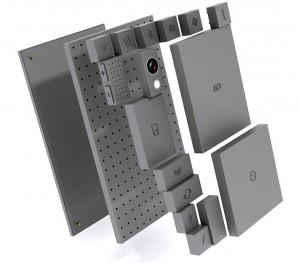 Mobile phones might be just the beginning. “The Phonebloks concept could be extended to all electronic devices: cameras, TVs, computers,” he says. “You could have building-blocks for electronics, with components that can be exchanged among them and can be upgraded.”

In such a world, it’s possible that new entrants would design the ultimate camera module, while others would specialize in the smallest, lightest battery, and still others would focus on packing more capacity into the memory module. Just as now, you can buy specialized software to meet your needs: in the future, you may be able to buy pieces of a phone to put together the mobile device best suited to your uses.

While some companies choose modular design for competitive advantage, others might find themselves pushed in that direction by environmental-protection laws. The Consultative Commission on Industrial Change (CCMI) for the European Economic and Social Committee of the European Union is working on ways to stop planned obsolescence.

For example, a decade ago the EU banned chips in printer cartridges that signaled the cartridges were empty when they still contained ink. Now it’s taking aim at things like batteries in phones that are impossible for people to replace themselves—and which are so expensive to have fixed by the manufacturer that most people just buy a new phone instead.

“We’ll have less waste,” says Jean-Pierre Haber, delegate of the CCMI consultative committee. “We now create 500 tons of waste per person per year.”

Overall, the thrust is to promote the design of goods that can be repaired or upgraded, rather than requiring purchase of a completely new item.

The online community iFixit, which encourages repair over replacement, suggests design features such as product cases that are easy to open, or that have doors to allow access to the inner workings; making the most breakable parts the easiest to access; making some internal components standardized and replaceable by commodity parts; making repair instructions free and publicly available.

We need lots of innovation,” Mr. Haber says. “But we need innovation that gives added value for the consumer and that doesn’t create problems for the environment.”

Tweet: “We need innovation that gives added value for the consumer and that doesn’t create problems for the environment”