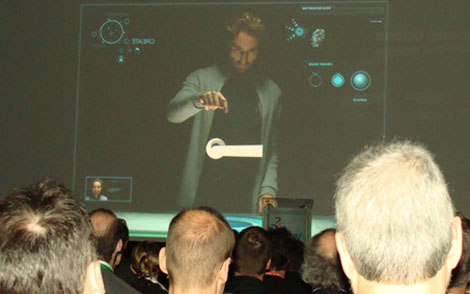 At today’s plenary session, CATIA CEO Jacques Leveille Nizerolle welcomed guests and turned over the show to Anne Asensio saying, “I told Anne that this is her day.”

Each presentation was fascinating, and I noted that almost everyone at some point repeated the same message: Design must be focused on humans, and the future of Design is customers doing the designing. I also heard a few times something along the lines of, “Creativity is individual, but innovation is collaborative.”

Anne told us that Design is emotional, and she certainly did a nice job of lining up some emotional treats. Her presentation started with a hip futuristic video, offering her team’s vision of tomorrow’s collaborative Design. I took a photo of it, which is pasted at the top of this post. I’m told DS Design Studio will post it on their new website soon (I wanted to get it to you for today, but they were busy in the dedicated Design track until late afternoon). Anyway, this is definitely worth a view, so I’ll let you know when it’s available online.

Anne also showed us a virtual simulation of real water pouring on a floor. Who knew our R&D department had been working on an algorithm for water? Anne explained, “This is about physical aspects of nature used within modelization.” Another wow.

Ayse Birsel of Bisel+Seck presented next. Her design studio is known for product design for companies such as Herman Miller and is also part of DS Design Studio’s ecosystem. Ayse spoke about how users are the new designers, and that now a designer’s role is to visualize the future. And in order to visualize the future, designers have to put the user in the center of their reflection process. She gave the example of designing a chair. You can design a chair without thinking about humans. You can design a chair for humans to sit on. You can design a chair for a tired human who’s been standing all day to sit on. Each chair will be very different. (I’m omitting the wow moment of Ayse’s presentation because I’d like to dig deeper and give you fuller details. More later.)

Next we heard from Andreas Riedmann, a design engineer in the R&D department of Otto Bock. In addition to bionic limbs, they make wow products like their hybrid wheelchair/paragolfer vehicle. What impressed me the most is that they’re developing thought-powered prostheses. Think connecting real human nerve endings directly to prosthetic hands, arms or other. No, think Will Smith in his film “i,robot”.

And finally, well, who doesn’t say wow! when then learn about BMW’s GINA vehicle. Chris Bangle was “present” in the form on an optical theater special effect but managed to chat with Anne anyway while giving us a fascinating presentation on “The GINA Philosophy” and how the car came to be. We even got to see a video of GINA in all her behaviors. Check out GINA for yourself in this video I found on YouTube:

If you attended ECF, please jump in on the comments section. I’d love to hear your impressions about these speakers.