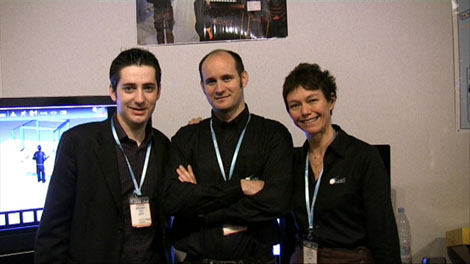 Hi everyone. For my last day at Laval Virtual, I can’t help but blog about another CLARTE creation, Ergo Wide 3. CLARTE worked in tight collaboration with INERGY for three years to create exactly what was needed. Here’s the real-world scenario that this VR application resolves:

A fuel tank manufacturer called INERGY contacted CLARTE because they were losing too many employees to sick leave. Because of certain production line work station ergonomics, workers were taking long periods of absence due to work-induced injuries. On top of that, the company didn’t have the time or resources necessary to study multiple work station scenarios for all their locations.

Traditionally INERGY’s factories would receive production line set-ups with very limited adjustment/personalization options. For example, maybe the only thing the work station employee could adjust would be the height of the table. If the station was designed by really short people but used by really tall people, the tall workers would quickly start experiencing back pain.

The fact that the world keeps “getting smaller” and companies are spreading their manufacturing internationally multiplies the possibilities for work station mismatches and injury.

But what if the people actually working on the production line helped to design their work stations?

This is possible with Ergo Wide 3.

In fact the application is already in production by a subsidiary of INERGY called Troy. The first usage was for a workstation design for a factory in Korea. Through the application, someone at Troy headquartered in the US worked with a factory worker in Korea through a Web-based immersive virtuality environment.

Here’s an example of how the configuration works:

You can watch this CLARTE-created video to get a better feel:

1. Crowdsourcing. What a smart concept to let the actual production line workers help design their workstations. Everyone wins this way.
2. Ergonomic science. I love how they’ve linked industry-standard ergonomics norms into the application. It’s precise and practical.

Bravo to the teams from CLARTE, INERGY for a great application!

P.S. Here’s the skinny on the software. They use SolidWorks and CATIA to create the production line environment and objects and 3DXML to import the 3D CAD data into the VR cave with 3DVIA Virtools. They use 3DVIA Virtools VR Pack for the cave, 3DVIA Multi-User Pack for the distant collaboration, and the 3DVIA web player for the remote application.