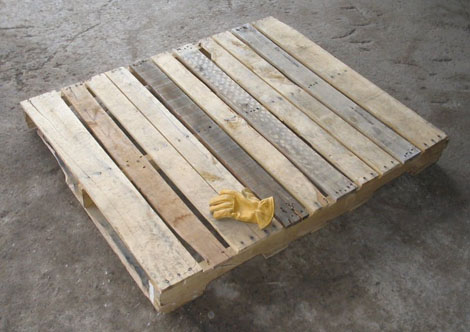 Hi. It’s day two at Laval Virtual and there are even more people circulating around the show floor. Today I’d like to showcase another example of how virtual reality is being used in the industrial world (although I’m tempted to tell you about the mixed reality bad breath game).

Virtual reality can be applied even to the most mundane things, like wooden pallets. Who even thinks about these? If you’ve ever been to IKEA you’ve walked by them in the warehouse/check out section. If you’ve ever been to the grocery store when they’re bringing in forklifted stacks of boxes packed with canned goods, you’ve seen them.

Have you ever thought about burning wooden pallets?

Well I can tell you that at least the pallet handling and logistics company Planet Pal has, and so has their insurance provider.

Planet Pal wanted to build a VR application to help them analyze a plethora of pallet burning scenarios, without burning away a plethora of physical and monetary resources.

They’ve partnered with some graduate students studying in the VR masters program at MNRV here in Laval, France. Three female students were assigned to the project. (I’m highlighting the female bit because the virtual reality industry is a very masculine world, so if you’re a young woman and interested in working in VR, go for it! There’s great work to be done.) They named the application Virtual Fire.

In the case of the Laval Virtual demo everything “takes place” in the virtual replication of a real warehouse facility stockyard. Here’s how it works:

1. With your computer mouse, select the type of pallet you’d like to test and place it anywhere in the virtual environment. You can stack up to 50 pallets in one tower. Add as many pallet stacks that you’d like and arrange them together.
2. Select the fire (comes as a red triangle until you activate the burning) and place it where you’d like the fire to start.
3. Select the wind force and direction.
4. Start the fire.

Before your eyes, the poor wooden pallets will burn at an astonishingly fast rate. During my demo they were gone in 28 seconds. Like that. The application gives a sort of “score” after the experiment, showing you stats on the wind, stacks and burn time.

Here’s where the serious gaming part shines. You can repeat the exercise with the same wind conditions and fire origin (or other), but this time put more space between your stacks. See what happens. And tweak until you save the maximum number of stacks.

Today Virtual Fire is a prototype. Planet Pal plans to use it to prove to its insurance provider that the company is aware and sensitive to fire hazards, which is good for keeping its insurance coverage. And not only that, they’ll be able to apply the knowledge learned from the virtual experiments to create safer real-life pallet scenarios.

The developers told me they will be evolving the application to include other elements like geolocalisation, which links to fire factors such as air humidity and the types of winds you may expect at certain locations.

I always like to dream about future innovation possibilities, so imagine if a pallet fire spreads to neighboring homes or businesses? How many seconds or minutes would it take for an entire block to go down in flames? I think this would be really useful information for municipal planners and firemen, and of course us citizens who would benefit from safer communities!

So while wooden pallets may seem mundane, I think we all agree that fires are anything but that. Virtual Fire is another cool, or should I say hot, example of how virtual reality can help us live better lives.

Many thanks to the developers Lucie Coudurier, Nadège Carlier and Emilie Brisseau for such an elegant and useful VR application. Thanks also to the students at the Institute for Applied Mathematics who developed the fire algorithm, the secret to making the virtual fire scientifically realistic.