Imagine you’re an industrial designer who also loves music. What would be the most interesting way to combine those passions?

For Takumi Yamamoto, it was to design a car in honor of one of his favorite performers: David Bowie.

As a child as young as 9, Yamamoto fell in love with Bowie’s music. He had a Bowie poster on his bedroom that featured the letters ‘db.’  To Yamamoto, those letters looked like a car badge. He wanted to honor both Bowie’s musical talents and his own design talents to create something never before seen.

For 20 years, he thought about this. During that time, inspired by his love of cars, Yamamoto became a professional car designer; he famously designed the futuristic “GT by Citroën” for Gran Turismo 5. He also founded a design consultancy that provides industrial design, advice on how to present design ideas and designs iconic cars.

In 2016 he started to bring his big idea to life. Then we was dealt a blow: he was preparing to meet the singer when Bowie died. Despite his initial doubt that he could continue to achieve his vision, Yamamoto shifted his mindset from doing it with Bowie to instead for him. 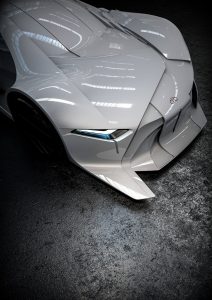 As an artist uses paint or clay to express their subjects; Yamamoto wanted to create a representation of Bowie through a car.  To do this, he extracted keywords which represent Bowie’s character – or more precisely, his characters, as Bowie had put forth a wide range of personas over the years.

The design was done using ICEM and CATIA Natural Sketch VR on the 3DEXPERIENCE platform. This provides designers a new way to visualize their ideas directly in a 3D environment. Through this immersive experience, different types of sketch can be used to generate surfaces quickly to find the right shape, with easy ability to test variants of the shape. But in the virtual world, it can be different to understand perspective, so the team used the 3DEXPERIENCE platform’s stereo capabilities. This saves time by avoiding a costly physical mockup by allowing human and context environment. 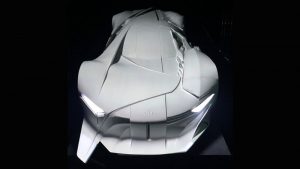 Songs can change a form through parametric design, and this allowed one way to collaborate with Bowie when he was no longer alive. Shapes and patterns inspired by the soundtrack created digital parameters using waves of sound. But this was not just about the shape; the music also influenced patterns (size, position, height etc.). The mathematical patterns generated by the CATIA team were applied in the final design.

Through all of this, the car was created in virtual reality. As exciting as that was, it wasn’t enough. Yamamoto wanted to bring it to life. He had the opportunity to do so when offered the chance to present the car at the 2019 International Automobile Festival in Paris.

As thrilling as this was, it presented a significant challenge. Yakamoto wanted to 3D print the car instead of using traditional manufacturing techniques, as he felt it was a portrait and 3D printing would be more true to the artistic aspect of the project. To do so would require a huge 3D printer. The team partnered with Marie 3D to use the Massivit 1800 to create the physical representation of the car.  You can see how they did it in this video:

When exhibiting at the show, the team used projection lighting to create a display on the car that represented different periods of Bowie’s character and career.

Between his work on production cars and concept cars, Yamamoto has said he hopes to inspire the next generation to design cutting-edge cars in the way he was inspired as a child.

Yamamoto spoke about this project during our annual Design in the Age of Experience event in April; you can watch his talk here:

The car will next be on display on September 10th during the designers’ night event in Frankfurt, an annual invitation-only event for automotive designers, surface creators and design studios. More details here.