from Dassault Systèmes
Can you imagine a world where data is used as a key source for design?
This futuristic vision was the underpinning of our recent Hackathon at the Design in the Age of Experience event during the Milan Design Week. 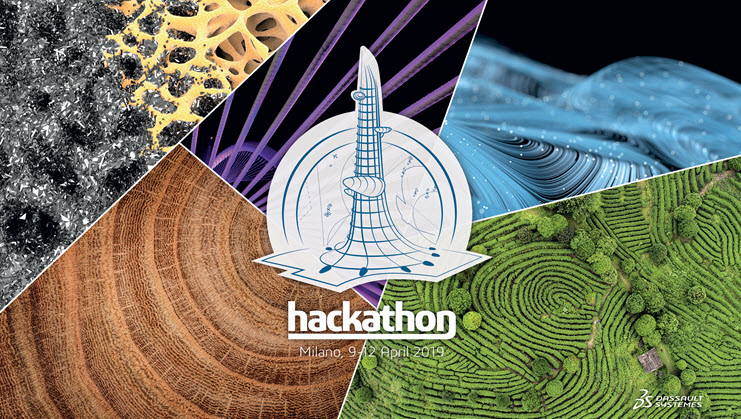 A staggering statistic: more than 90% of the world’s data has been generated in the last two years. This trend will continue as data from mobile computing, artificial intelligence and augmented reality grows. The merging of virtual and physical worlds presents new opportunities for designers to address societal and sustainability challenges. How will they embrace and use data-driven landscapes to create product and architectural experiences that will uplift the lives of citizens?
This is the challenge we put before five teams. The DATAVIRONMENT Hackathon Challenge asked each group – randomly assembled from a pool of Dassault Systèmes’ R&D experts and 3DEXPERIENCE Champions from multiple countries, representing top architecture and design-driven firms – to design a future data-centric city using CATIA and SOLIDWORKS. Using 3DEXPERIENCity model of Milan to appropriate their ideas into a real-life context, each team had 48 hours to create their own vision for DATAVIRONMENT.  They were then judged on their overall storytelling and the virtual reality experience.
Let’s dig into what each team created!

Revitalizing nearly 75k sq.m of open railroad area in the heart of the city, Team 1 created a 2 km long promenade that connects the old and new areas of Milan. Data shapes it and defines its function while its citizens constantly provide more human-centric data to sustain this city of the future.

Shadow analysis, temperature and pedestrian flux are used to shape the promenade to address increasing extremes in temperatures. Kinetic canopies react to real-ime sunlight and temperature data to offer optimal shade and cooling. The promenade serves as a beacon for Participatory Governance. Citizens are provided with dashboards to see the “health” of their city and to offer a medium to voice their needs and opinions.

Here’s how #team1 connects the old and the new areas of Milan. pic.twitter.com/COpJv8lv0d

Imagine if you could reclaim space in the City of Milan that has, for years, provided little value to the city and its residents. Try to picture the effect on a city of adding usable public space without expanding its boundaries. While many cities continue to move infrastructure and transportation underground, the demand for surface transportation has not decreased, nor have the effects of this demand on the city-scape abated. There is an impending paradigm shift which will challenge the status quo and the current popularity of personal vehicles. Self driving cars are poised to eliminate the need for parking almost entirely. The city of Milan, and cities in general, will soon need robust plans for how to transform this once fallow space into something that nourishes and energizes its people. Team 2 was inspired to approach this issue after navigating the choking, cramped streets of Milan. They asked “What would Milan look like without cars?” and soon realized that cars in motion were much less of an intrusion into public space than immobile, parked cars. Their calculations showed that reclaiming the space occupied by parked cars could return an estimated 10% of usable space to the city of Milan. Answering the question of how a city might use this additional space inspired their project, “The 10%.” They proposed replacing parking garages and parking lots with structures housing modular, urban farming units and green power generation and storage facilities. Self driving traffic would be restricted to a single lane with intermittent turn offs, and extend sidewalks would add green-space and social infrastructure. These structures would provide locally grown produce and relieve pressure on the power grid by producing and storing electricity. The ground floor would be open to the public to distribute the food grown above as well as educating visitors about the project and other citywide initiatives.

#team2 is taking a bold step into the future. Check out how they envision we could optimize space in the cities of tomorrow. pic.twitter.com/p0krOjmy7E

The Living Data District is a new district of Milan which unites Parco Sempione and City Life with a new data environment, celebrating the mixing of the city’s history and future, the built and the digital, science and art. Here, data is honored as the digital pulse of the people, and is represented as an ever-beating holographic form that weaves in and out of the streets and buildings. This pulse has different frequencies and information based on the individual’s setting when wearing augmented reality glasses, creating a custom urban experience. Information is collected throughout the city through Data Pylons. These fixtures serve as personal data collectors, sensor hubs for real-time urban tracking and backup data storage distributed throughout the district in a network of pedestrian and information pathways. The Pylons also contribute to the physical well-being of the city by creating shading canopies, storing solar energy and providing air filtration to actively reduce pollution. By distributing the opportunities for data interaction throughout the city, the public is given agency to actively contribute to the digital environment while inhabiting the physical one. The Living Data Tower serves as a data storage hub for all of Milano, providing high-speed internet and information access to all the people in the district. At the top, an observatory provides a panoramic view of the city, with an  augmented layer of spatialized data upon the built environment, illuminating how alive the city is.

#team3 created a huge futuristic sustainable data center at the heart of the city, bringing data closer to the people. pic.twitter.com/udfhGcTO7y pic.twitter.com/TNf0ouHYqp

A city can be understood as a complex collection of data – statistical and cultural, historical and contemporary. Each instance of urban change is contingent on the state of that information, and in turn adds new values to the flow. It follows that responsible, effective designers cannot be fulfilled by limiting analysis to isolated sites, or proposed solutions to one-off buildings. To harmonize all elements of a city into healthy, even delightful human experiences, we have to expose ourselves – and hold ourselves accountable – to the full complexity of the urban context. Ethical design demands the ability to respond immediately and intelligently to a city’s global criteria.

With their data made visible and harnessed, cities of the future may be made minutely responsive to the needs of all their residents. Real-time decision-making then becomes possible for the first time. Optimized through parametric modeling, temporal zoning, and responsive land-use planning, the shape of change can be thoughtfully directed to equitable ends.

Team 4 designed a system able to synthesize diverse sets of contextual information in order to generate actionable infrastructural responses. A master planning tool, the xGenerative Design definition, considers municipal datasets, as well as an imposed criteria of topological rules of scale and massing that reflect urban design best-practices. The system instantiates city blocks based on a polyline profile, providing an informed 3D baseline framework to host both master planning and design, collapsed efficiently into a single act of authorship. From the level of the urban block, the tool effortlessly scales to be instantiated along a corridor of thirteen sites. This results in a gradient of integrated and mutually cognizant massing, land-use, and programmatic outputs that shift responsively between the low-rise historic and high-rise contemporary districts of the test-set city.

#team4 developed a system capable of designing cities of the future. Hear how they did it! pic.twitter.com/jCV1TUbO9b

Team 5 used the complete collaborative capacities of the 3DEXPERIENCE platform, as well as the web applications portfolio –  xGenerative Design, xDesign, xShape, and xStudio – in order to automatically generate bars and restaurant extensions in Milan, using the City’s data. The global idea of the project is the creation of city-level template, which is able to automatically generate a new extension, in less than two minutes, and then instantly instantiate it where it is needed throughout the City.

To create these modular building extensions, Team 5 developed a specific methodology based on templates, allowing strong collaboration and parallel work at the same time. xGenerative Design prepares building location, according to city data and citizen needs for surrounding building and shadow projection. Multiple metallic parts for the modular structure with xDesign are then created, coupled with four different glass panels, created and refined thanks to xShape. xGenerative Design was then used again to generate the most adapted volume, and manage the randomized positioning of all glass panels and structural parts.

Finally, #team5 used all the web applications of the #3DEXPERIENCE to automatically create new bars and restaurant extensions based on the city data of Milan. pic.twitter.com/bCbQEWjKQ0

And the winner is…

The Hackathon mixed the most progressive architectural and design practices in the world to address and solve complex environmental challenges.  Our professional jury, comprised of our internal design experts as well as Kerenza Harris, Director of Design Technology at Morphosis and leading architect Toshiko Mori, voted TEAM 4 the winner.
We also let the public vote, and they selected TEAM 3 as the top project.
Congratulations to all teams! Some amazing ideas were proposed for solving the challenges of our cities!
We also invite you to view the video featuring highlights of the entire Hackathon.
0