The future belongs to those who believe in the beauty of their dreams.

Dassault Systèmes in France – by renewing its commitment to REVES DE GOSSE – has enabled fifty “extraordinary” children to make their dreams a reality by flying alongside experienced crews, in 2017. 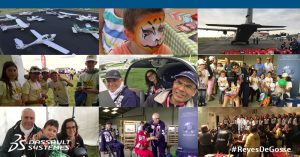 Many thanks to all the “Knights of the Sky” from Dassault Systèmes for their determination to make difference accepted, for their commitment to children, and for their infinite generosity.

We also would like to thank Frédéric DOT for his contribution as Dassault Systèmes’ leadoff pilot this year during the stopover in Vélizy-Villacoublay, but also to all the partners who supported this fabulous adventure.

Our mission was to offer children a moment of discovery. This year again, children and REVES DE GOSSE sent us a beautiful message: The future definitely belongs to those who believe in the beauty of their dreams.

As Antoine de Saint Exupéry said, “Once the route has been mapped out, you can’t not follow it“…

In addition, enjoy the French messages exchanged during the 2017 tour in the Storify hereunder as well the 2017 diary written by the Dassault Systèmes crew: L’écho des nuages – Le tour 2017 and the video done at the Salon du Bourget 2017 where our pilot: Eric is interviewed by the Vlogger Jean-Baptiste GOUPIL. Share them!