The following article is excerpted from Civil Design Innovation, a whitepaper developed by Dassault Systèmes and SMEDI. To read more, download the full whitepaper here. 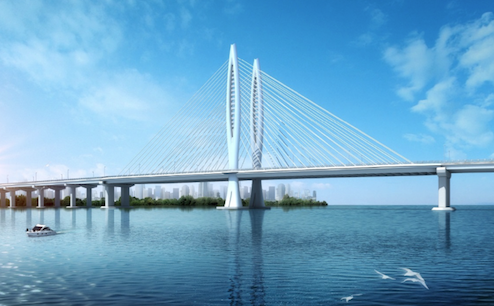 With the exponential growth in global population and living standards and the accelerated development of infrastructure to support it, the quantity and scale of civil engineering projects worldwide is constantly on the rise.

As reported in Capital Project and Infrastructure Spending: Outlook to 2025, published by PricewaterhouseCoopers (PwC), infrastructure spending worldwide is expected to reach more than US$9 trillion per year by 2025, more than doubling from US$4 trillion in 2012. This is particularly apparent in China, the Middle East, Brazil, Argentina, and India, where economies are growing at phenomenal speed.

According to Global Construction Perspectives, 63% of global construction activities will take place in emerging markets, largely driven by China and India, by 2025.

As remarked in the PwC report, an additional 180 airports are estimated to be needed in India alone in the next decade.

In the past, the vast majority of the infrastructure projects were initiated by the governments concerned.

However, as government budgets get tighter, especially for countries that are politically unstable and with weak government finances, more and more private companies are getting involved in these projects in the form of Public Partnerships or Private Finance Initiatives.

These private companies have growing concern about ROI and higher efficiency — in both design and construction — to result in greater and faster profits.

The latest innovations and breakthroughs in civil design and construction in China are in the context of two trends:

1. China’s strategy in developing civil design and construction practices is to use Building Information Modeling (BIM) to fuel the industrialization process.

The United States, Japan and European countries are already highly industrialized countries and, as a result, have well-developed IT industries. China is committed to using BIM as a means of driving the industrialization of construction. This is the country’s ongoing strategy.

2. In addition, China is shifting from a planned economy to a market-driven economy.

In the past, under the planned economy, the Shanghai Municipal Engineering Design Institute (Group) Co., Ltd. (SMEDI, or “the Civil Design Institute”), was one of the largest departments in infrastructure design and even was given supreme authority to the degree of specifying details to be used for construction.

Now, under the market-driven economy, the Civil Design Institute remains an important function, but its direct influence on entire projects is diminishing, particularly the downstream construction processes.

For example, consensus from multiple stakeholders is now required for highway projects before design instructions are finalized, whereas in the past, the Civil Design Institute had full autonomy.

CHALLENGES IN THE CIVIL DESIGN PROCESS

In recent years, there has been a growing trend for projects to involve international collaboration. For instance, a government project in the Middle East may engage a design consultancy from the U.K., working with a general contractor employing local people. At the same time, the equipment or components used may be from Continental Europe.

This calls for an efficient global collaboration model that enables flexible design adjustments, for example, BIM, which is gaining popularity.

One of the factors that accompanies China’s rapid development is the adoption of a “three parallels” practice, where the three processes of design, construction and modifications in design are operated in parallel; and even before completion of the design, the construction phase is initiated.

This is caused by rushing the construction of infrastructure.

The fact is, sometimes even the project owners do not have a clear idea how the final product will look until they see the physical project beginning to take shape, after which they may wish to modify the original design.

Sometimes, the Civil Design Institute can only design the foundation at its beginning stage, because the project owner has no clear idea what he really wants. This means that projects are often suspended at the design stage. It can be difficult and time-intensive to align the owner’s intentions and the design itself.

Back in the 1990s, the Civil Design Institute had more control over every detail, across all their construction projects.

Now, in contrast, they have no authority over what downstream processes should be or how they should be initiated. Today, all their designs need to be approved and last-minute modifications in design are not uncommon during construction. This means it is difficult to predict the quality of work and when the projects will be implemented and completed.

First, it was difficult to control material waste, because substantial construction waste was produced at the site and disposal was an issue.

Second, it was hard to manage cost, because a lot of uncertainties can occur during construction on-site.

Third, as more construction procedures took place on-site, it was much more difficult to manage the schedule.

And last, as most of the construction took place on-site, much more space was being utilized than if prefabrication construction was practiced. This meant that surrounding roads were often blocked for extended periods causing traffic jams.

These problems can be addressed in several ways. The Civil Design Institute could fully integrate a system of engineering, procurement and construction (EPC). They might utilize prefabrication whenever possible, for example prefabricating the reinforced concrete components and assembling them on site.

Another method is to employ BIM technology, so that different professionals can work with the same model and have information transfer at different stages through a unified format, thereby significantly enhancing overall efficiency. 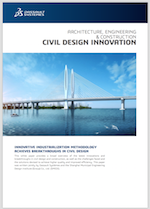 This whitepaper provides a broad overview of the latest innovations and breakthroughs in civil design and construction, as well as the challenges faced and the solutions devised to achieve higher quality and improved efficiency. Written jointly by Dassault Systèmes and the Shanghai Municipal Engineering Design Institute (SMEDI).